"Dinner in a Mechanics Garage? What the hell did you agree to?!" I yelled at a friend. But the plans were made and we couldn't back out now. Driving along Kingsgrove Road, we eventually find the closed Mechanics shop and park in one of the side streets. The whole time we walked from the car to the Mechanics, we kept arguing about why we're going to a Mechanics for dinner, and why would it serve awesome Greek food?! 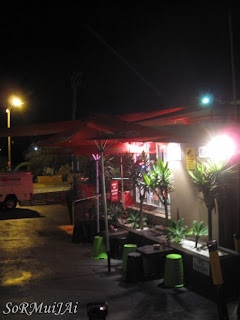 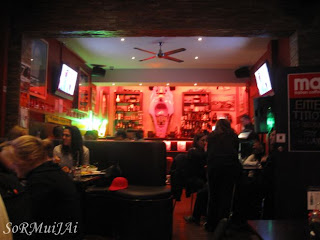 Turns out, we're NOT eating in the Mechanics Garage. The garage was apparently cut in half and converted into a Cafe/Restaurant. My friend having driven by many times, assumed it was just a coffee shack you sit in whilst your car gets serviced. Thankfully, with the encouragement of our Greek friends, we find ourselves seated at Giorgios Cafe. The decoration is a bit of a mish mash of assorted things, but was cosy and comfortable, even though it was freezing outside. 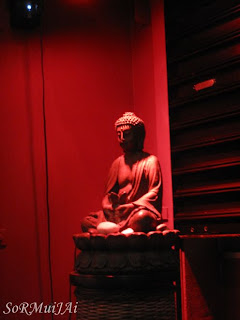 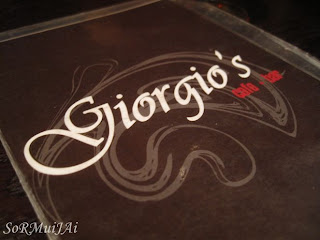 Since our friends frequent Giorgio's, we left all the ordering up to them. Apparently it was a very simple choice. Mixed platter for 4 (Minimum 2 people).

The wine is poured, conversation is flowing, laughter erupts around the table before dead silence when the food is delivered. 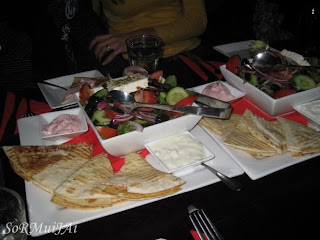 Errrrrr.....This must be the whole meal right? We're having a dinner of just salad and dips and bread right? I'm not complaining, because the soft warm pita bread went fantastic with the hummus, taramasalata and babaganoush. The Greek salad had a lovely soft and creamy fetta, not the hard blocks of chalk you usually get. But....look at the size of it? And look at the size of it compared to the second course: 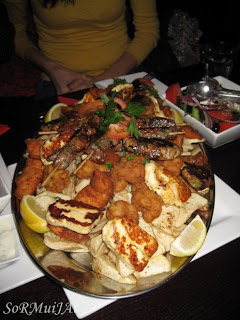 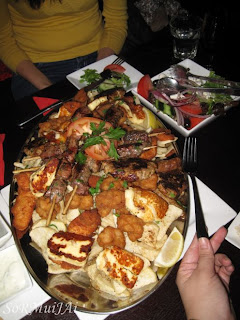 The silence was punctuated by the gasps and squeals that was apparently coming from....me. This thing was HUGE. Its Gianormous! Its... its like being presented with a whole cow. Except the cow is wrapped with haloumi and calamari and more cow and then the whole cow is put on a bed of chips!

Once the initial shock passes, and we've finished taking photos to document this monster, we dig in. The mixed platter contains perfectly squeeky haloumi, rissoles, souvalaki sticks, sausages, fish cocktails, fried squid and potatoes. Heaps of potatoes in 2 forms. Crunchy shoe string fries and the most amazing hand cut wedges. Crunchy, yet incredibly soft and fluffy in the centre.

Now anyone who knows me, knows my weakness for chips. Especially hot chips. I don't care if they're crunchy, soft, limp, fluffy or hollow. Heck, I even love stale chips! And now I'm presented with a platter that contains roughly 2kgs of pure potato starchy heaven topped with a greek meat feast that's supposed to feed 4 people...and 2 of them are small eaters....what do I do? I almost fall face down into the platter and gorge myself til I was sick. Did I mention we though dinner was going to be crap (because it was in a "Mechanics Garage"), so we stopped by red roosters earlier to gorge on some chips first? Gosh I'm so classy.

As much as we tried, we didn't get half way through the food. I regrettably had to leave half of the chips behind even though I was about to explode from the potato expansion that was happening in my stomach. Not being able to move (Which is always a good sign of a Greek feast), our friends decide to teach me to play backgammon. It was an intense 1hr battle, and in the end, we won. I don't know how we won, but we won. And I still don't know what backgammon is about. I do know, however, that Giorgios has an iced coffee on the menu, where they write their name in chocolate syrup! But when I questioned the waiter if they 100% write the name on the coffee, he said no. So with a little pleading, he took our special requests to get the name written on the coffee: 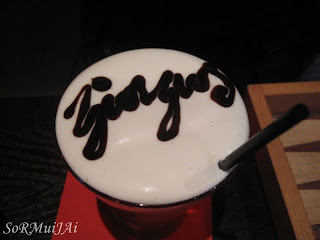 The whole feast cost us less than $30 each and we practically had to waddle out of there. Looking at the other diners, they will have to do the same even though they didn't get the platter!

Posted by SoRMuiJAi at 12:37 AM No comments:

Email ThisBlogThis!Share to TwitterShare to FacebookShare to Pinterest
Labels: Eating out, Food, Greek

What happens when I'm at home with nothing to watch, nothing to play, nothing to read and just plain bored? I hit the kitchen to keep myself occupied! On this occasion, I did a late night raid of my neighbour's rosemary bush to try and make up a batch of garlic, olive and rosemary focaccia! 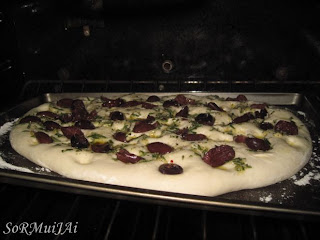 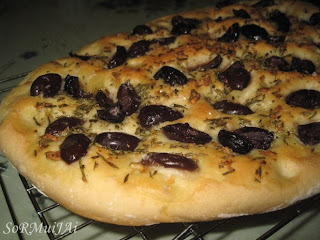 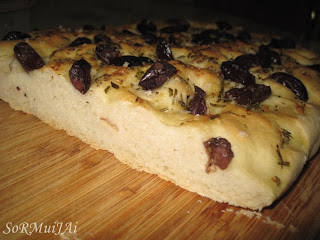 10mins of kneading, some light chopping of rosemary, garlic and olives and voila! Instant focaccia! I should've covered the focaccia in more olive oil to give it an extra light and buttery texture. But since I was eating this on its own for lunch, I decided to cut down on the oil for a healthier version. Thank goodness I did that, because I ate most of it the next day! hehe
Posted by SoRMuiJAi at 8:06 PM 3 comments:

A quick catch up lunch with my friend led us to Martin Place bar. Since we were more concerned with chatting than eating, we ordered the standard fare off the menu. 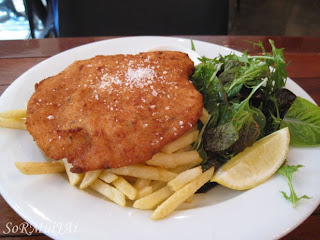 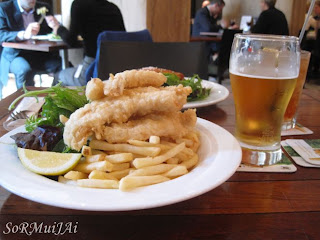 Tempura flathead, chips and salad
I was surprised how huge the servings are! I love my chips and almost never leave chips behind. But even this was too much for me and about half was left uneaten. The flathead was tasty, but the batter was a bit soft and tasted of oil. My friend really enjoyed the schnitzel, but again, left a heap of the chips behind!


View Larger Map
Posted by SoRMuiJAi at 12:39 PM No comments:

Email ThisBlogThis!Share to TwitterShare to FacebookShare to Pinterest
Labels: Eating out, Food, Pub

Cheap crabs meant I get to mess around with recipes I usually wouldn't when they're at full price. I've always wanted to make Singapore Chilli crab and used this opportunity to try out Alex Lee's recipe. 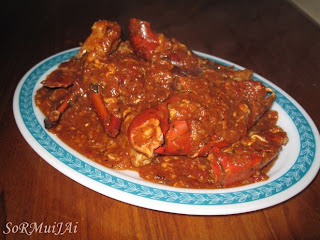 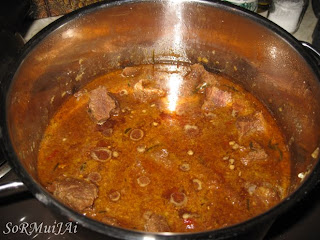 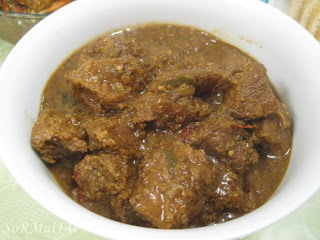 Finished!
Melt in your mouth rendang goodness! It needed more chilli, but since my nephews can't eat that spicy, I had to keep it fairly mild.

Now, Singapore Chilli crab AND beef rendang is starting to sound like a better birthday dinner.....but you need something to mop up all that gorgeous sauce don't you? How about a side of roti prata. Made from scratch of course! 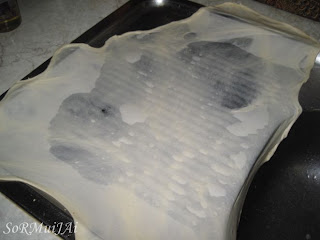 You can see through it!
Not much photos of the roti making process since I was covered head to toe with flour and oil! But I did get the nice flip/toss action going! Along with a little gentle careful stretching, I ended up with paper thin roti! 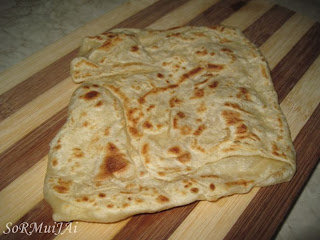 Roti Prata
I used about 1/4 of the oil needed to give it an ultra crispy flakey roti, but the layers are all there once you tear it apart! 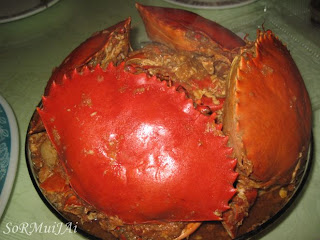 4kg of Singapore Chilli Crab
Who needs to go out for dinner when you can cook up a feast at home?
Posted by SoRMuiJAi at 12:52 PM 1 comment: