My manager had organised to take the whole team out for Go-Karting one day followed by dinner at the Bank Hotel. What better chance than to try our my collapsable sandwich box? 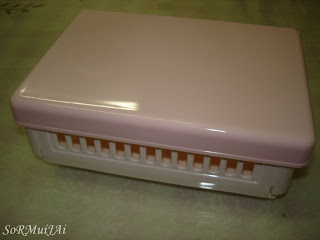 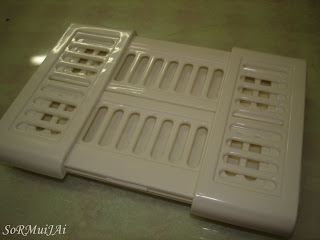 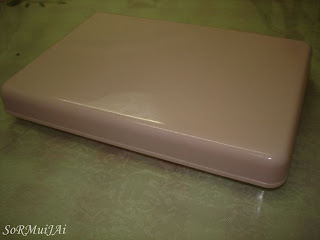 And this is what it looks like when its all folded up
To test out the anti-sogginess feature, I decided to make some hot sandwiches, but that means I've got to get up early to make it. GRRRRRRRR 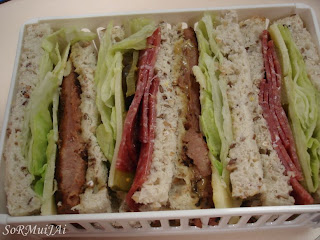 Toulouse sausage sandwich with cheese and lettuce
Salami with cheese, lettuce and bread and butter pickles
The box does seem to help with the sogginess factor. There were a few soggy pieces, but I think thats because I CRAMMED the sandwiches into the box when it was still really hot. No box would've saved me ;)
Posted by SoRMuiJAi at 9:23 PM No comments:

Back on the Japanese Bentos

I decided to stick with something Japanese for the last few bentos, just because I've been going out a bit at night, and haven't had the time to do something more creative. 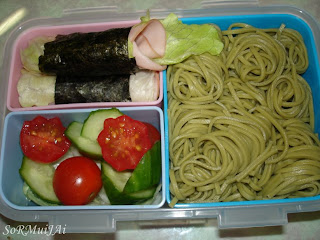 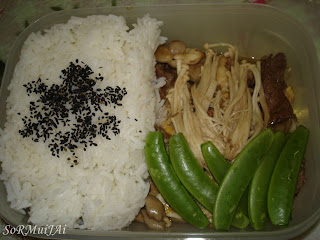 Gyudon...kind of. I mixed some oyster and inoki mushrooms with the beef and cooked it in a light sauce with egg over it. I put a bed of sugar snap peas under the rice, to stop it soaking up all the yummy broth. And that big black blob? Its supposed to be a star ;)
Posted by SoRMuiJAi at 9:06 PM No comments:

I was being really lazy and decided to basically raid the freezer, fridge and the leftovers. All really simple to make, the most time consuming would be the tamago. 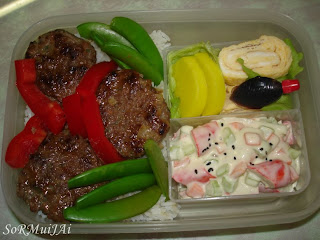 Beef rissoles on rice, courtesty of my mum and the freezer. I used the leftover carrot sticks from my leb bento box to dice up along with some celery and fake crab stick to make a salad with mayo. The leftover sugar snap peas was just throw in for decoration along with a half mangled capsicum. I also added a few slices of tamago (the sweet type you get with sushi) and takuan. 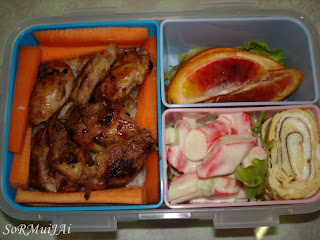 Teriyaki chicken on rice with a carrot border (again, leftovers from previous bento box). Note to self, always check chicken for bones when deboning it yourself. I'm sitting here with stomach pains because I'm still trying to digest a chicken drumstick bone I accidently swallowed at lunch. Anyone ever see that episode of House, where a dude swallows a toothpick, and the reason he was getting these stabbing pains was because the toothpick got stuck in his intestines pierced through them??

The rest of the box was the tamago and crab stick salad. I bought a few blood oranges at the markets so I added a few slices as dessert.

Posted by SoRMuiJAi at 10:44 PM No comments:

Since its a Sunday, it means I have a lot more time to prepare the bento. So I thought I'd try something a bit different and go Lebanese. 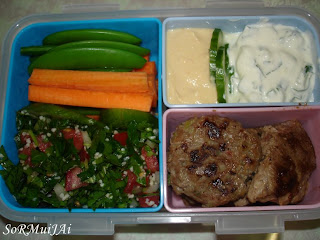 This is a fairly simple bento box even though its a bit more time consuming.than it looks. The tabouli was made using bulgur soaked in water, drained and then soaked in lemon juice. The parsley and mint was washed, drains and wiped dry with paper towels. I then chopped up the herbs finely, added diced tomato and onion, the bulgur and more lemon, salt and pepper. Mix and its done. The washing and drying of the herbs took the longest.

Hummus, theoretically should be super simple to make, if you've got a food processor. Since I don't, and my mortar and pestle is a bit too small to do it manually, I used a blender. Except my blender doesn't handle chickpeas well and it took me 10mins of shaking the damn thing whilst the blades are going to try and make it blend! It was worth it though. The end result was a smooth, creamy dip that has a lovely lemony kick. I made a big batch and froze quite a bit of them to eat another day.

The tzatziki should really be called cacik, which is the Turkish name for it. Simply rougly chop a cucumber, mint, add yoghurt and salt. Stir.
Posted by SoRMuiJAi at 9:30 PM No comments:

To celebrate Sarah's first birthday in Sydney, we organised to go Encasa for dinner. We ordered the tapas and pizza banquet, more than enough to stuff our face 3 times over. 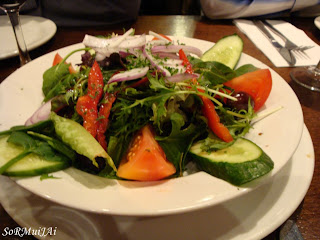 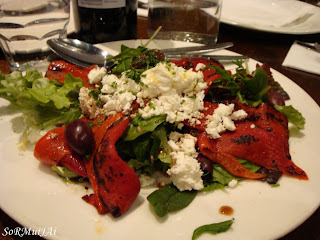 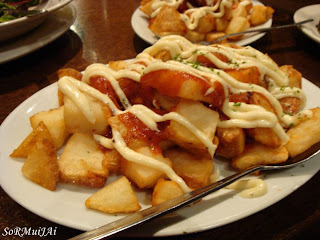 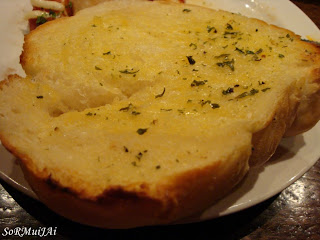 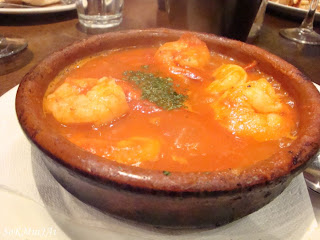 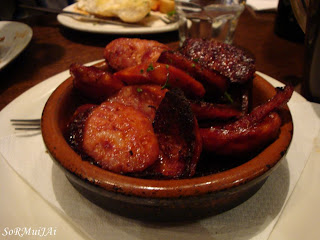 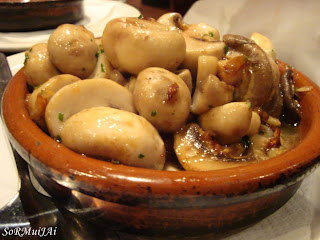 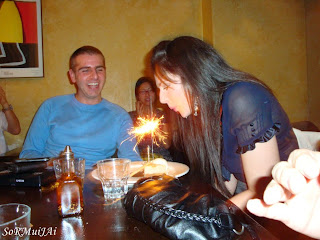 Happy Birthday!
The birthday girl got a slice of cinnamon cheesecake whilst we finished the rest of the pizzas off. No photos of those, I was too full to care by that stage. 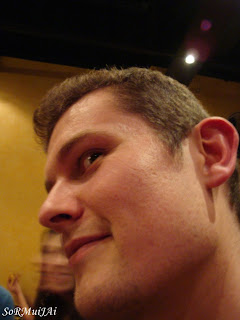 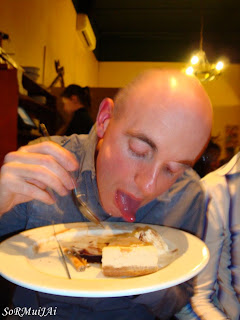 Sharing the cake.....I think?
After dinner, we headed up to the Art House for cocktails, and on the way we saw this? 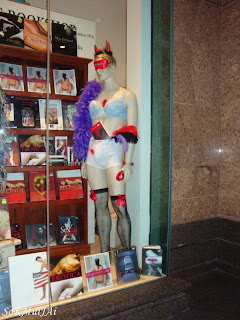 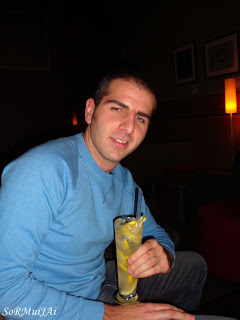 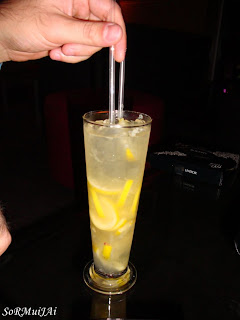 Close up of the Gold Member 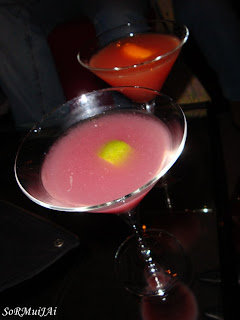 A concubine and something else.....I can't remember. Too much sangria ;)

Posted by SoRMuiJAi at 8:01 PM No comments:

My friend told me about Maruyu, which is a small Japanese grocery store that imports a lot of traditional Japanese things and is often frequented by Japanese people. I had to work on Sunday, which gave me a good excuse to dash across to Maruyu, about 10mins walk from my work to load up on some supplies. They also had a $2.50 store where I managed to pick up a few things as well. I told my friend about it, so we went back again today to buy MORE stuff. I almost bought a box of frozen Natto, but I didn't think my workmates will appreciate it.

If you think that's bad, I spent Saturday trawling through every single bargain store in Auburn to pick up other supplies as well. It was only today did I realise how much I've accumulated over 3 weeks?? 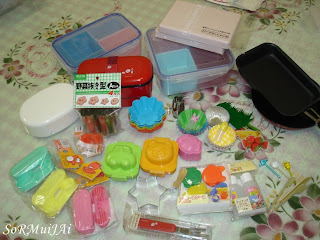 And the scary thing? That's not all. I know I'm missing 2 of my egg moulds (The bunny and the fish), another pan and a few other gadgets. I also managed to pick up 2 collapsable sandwich boxes (top middle, the pink boxes), I'll have to try those out soon.

At Maruyu, I also managed to find these! 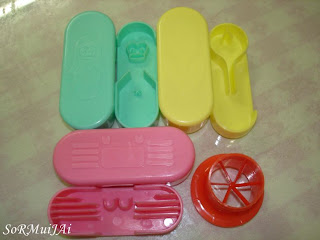 WTF is it? Sausage cutters. The green one is a penguin, yellow is a tulip and the pink is a crab. The red one is to make octopus sausages. You really need the proper japanese sausages that are firmer and skinner, but I grabbed some cocktail sausages to try out. 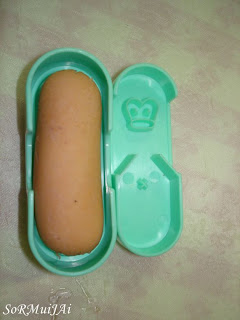 Peel skin and put in mould, press the cutter onto the sausage to get..... 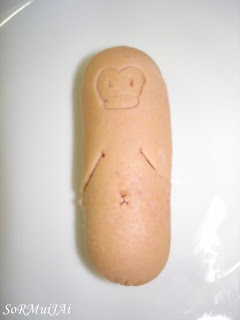 Penguin!! hehehe The crab one didn't turn out at all using these soft cocktail sausages, which was a real disappointment. The crab one was the one I was most excited about. I'm sure I'll figure out a way to use it properly.

Which brings me to my animal bento! I used the penguin cutter and the octopus cutter for the sausages. I then quickly pan fried the sausages with a bit of the bulgolgi marinade. 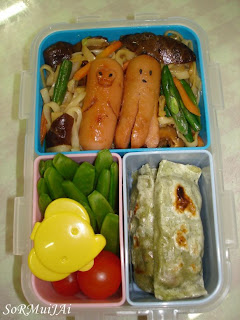 The noodles was leftover rice noodles I quickly tossed together with sliced green beans, carrots and leftover korean banchan mushrooms. I cooked up a few mandu and quickly blanched the sugar snap peas and packed it with the last of the cherry tomatoes. My little animal sauce containers arrived from eBay, and I filled that up with honey mustard.

Most of my bentos have been quite simple, nice delicate flavours, a balance of flavoured and unflavoured things. Because of that, I thought it was time to spice things up. I made a special pitstop to Campsie on the weekend so I could stock up on some Korean groceries. Even though Bentos are esssentially Japanese, I don't see what I can't apply the same concept to all other types of cuisines.

I followed some of the banchan recipes posted up by The Kitchen Wench to make up the different components of a bibimbap. I couldn't believe how simple it was to make most of my favourite side dishes! This took me about 20mins to make, which wasn't too bad as I had to make all the dishes from scratch. 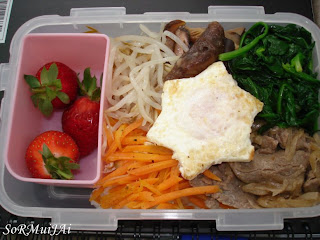 Most of the veggies were incredibly easy to make!

Beansprouts - blanch, drain, mix with salt and sesame oil
Spinach - blanch, rinse, drain, mix with salt and sesame oil
Carrots - Grate, saute gently with salt and pepper
Bulgolgi beef - I used a store bought marinade (absolutely amazing for a bottled marinade) and pan fried with some thinly sliced onions. I marinated the thin slices of beef for 3 hours.
Mushrooms - We had some rehydrated ones already in the fridge. I squeezed all the liquid out, sliced and pan fried in the same pan I used to cook the bulgolgi. I let it absorb some of the leftover juices and then added a dash of soya sauce.

I also bought a huge squeezey bottle of bibimbap chilli sauce and took that to work in a small container. It tasted fantastic! I can't wait to make it again.
Posted by SoRMuiJAi at 9:57 PM No comments: