A Quay Tasting Menu wannabe with a magnificent Snowegg

Its been over 2 decades, but we finally went ahead and renovated our kitchen. The only thing that didn't get changed in the kitchen was.....well, actually, we gutted the entire kitchen out and put a brand new one in there! Obviously with a new kitchen, I had to cook something special to break it in. And nothing is more worthy than the famous Quay Snowegg! Actually, after my first Quay visit when I saw the recipe online, I knew I wanted to attempt it!

Of course, if you're going to serve a Quay Snowegg for dessert, you can't just have any old food beforehand. So in the spirit of a Quay feast, I decided to hold a degustation dinner. Preparations started a week before the big day, trying out various recipes. As the day got closer, I started making the various components for the snowegg, starting with the ice cream and the granita. And just like MasterChef, I had a bit of a Callum moment when I was scraping the granita. A huge chunk of it flew out of the pan and onto the floor! Luckily I had plenty of granita left, so it wasn't an utter disaster. But I did have to get onto my hands and knees and scrub the kitchen floor and cabinets clean!

On the day of the actual dinner, I tackled the poached meringue, which was surprisingly easy to make. I left the maltose tuile as the very last thing to tackle, which was probably a bad idea. Don't get me wrong, I made the maltose toffee no problems. But the recipe then tells you to blend the toffee to a fine powder, so you can seive it to make the maltose tuile. Everything was going fine, until I crammed a MASSIVE hunk of toffee into my crappy little $15 stick blender with a tiny food chopper attachment. I hear a massive CRUNCH as I hit the pulse button. I press the pulse button again, and I can hear the motor whirring away, but it didn't seem to be blending. Sometimes the food gets stuck and you need to give the chopper a little shake and everything will be fine. On this occassion, as I lifted the chopper up to give it a shake, my hand slips and next thing you know, shards of maltose toffee flies out of the processor and lands all over the brand new kitchen bench top, cabinet doors, floor, my clothes and even in my hair. There was a full 5 secs of silence as everything sinks in, before I start screaming in panic.

There's about 2 hours before everyone arrives and I've just scattered shards of toffee like confetti all around the kitchen. 20mins of mass panic sets in as I try to contain the mess. When I finally managed to remove all traces of sticky sugar from all my orifices, I sent an emergency sms to all my friends begging/praying for someone to have a food processor. Looks like my $15 crapola was broken, and no food processor = no snowegg! Luckily my friend had one and offered to bring it over! *phew* crisis over. For now. 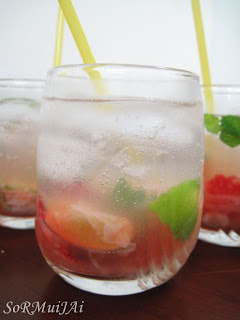 Strawberry, lychee and lime cocktail
Everyone finally arrived and dinner was served! 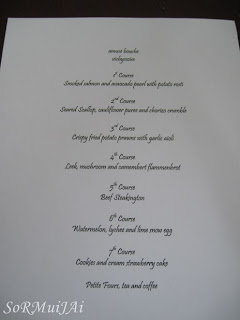 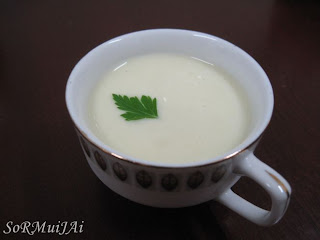 Amuse Bouche - Vichyssoise
I started the evening off with a Vichyssoise amuse bouche. Its essentially a chilled potato and leek soup. It was incredibly velvety and smooth. Of course, all the milk and cream I added would've helped. 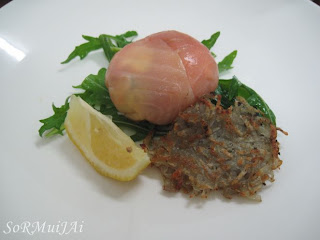 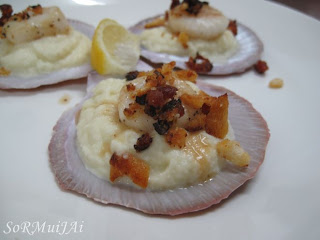 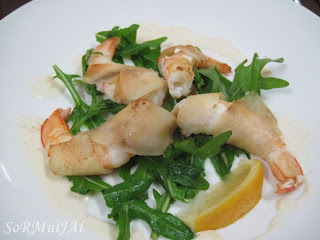 3rd Course - Crispy fried potato prawns with garlic aioli
This was a purely experimental dish that went quite well. Large king prawns wrapped in wafer thin slices of potato, panfried til crispy, served with salad and an aioli dressing. 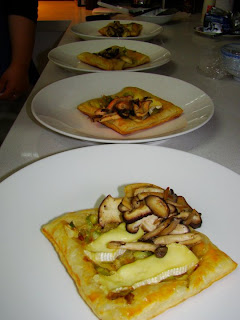 A simple leek and camembert flammenbrot served with sauteed garlic mushrooms. This got a big thumbs up and was one of the favourites of the day! If they liked what I served, they would've loved the bacon version! Maybe next time. (Forgot to take a photo so stole this from my friend! hehe) 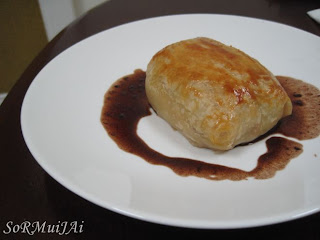 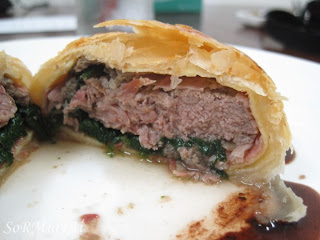 Fifth Course was a Beef Steakington with red wine jus. Basically a play on a Beef Wellington. Instead of a giant fillet of beef, I made individual portions out of steak. Except my portions were a bit off, and instead of being degustation size, these babies still turned out to be like a main course! The steak was a bit cooked for my liking, but perfect for my friends. (I do like my steak still mooing...) The red wine jus was a bit salty for my liking, but the beef steakington turned out quite tasty. But then, considering I've never eating a beef wellington in my life, I'm not sure how it compares.

The maltose tuile disaster did have a silver lining, as it meant a big break between courses as we tackled the last of the snowegg preps. Most of us were full to bursting! It took us about an hour to make all the maltose tuile and actually assemble the snowegg. 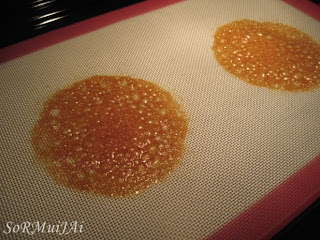 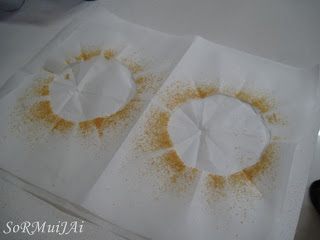 DIY Stencils
Since Strawberry Guava and custard apple wasn't in season, I made a Watermelon, lime and lychee version instead. And here is the final result! 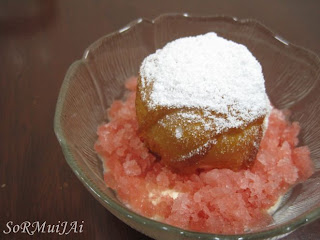 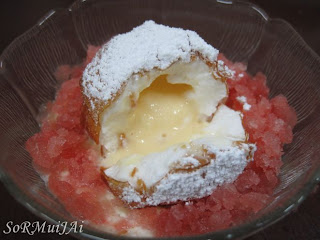 Innards...
Oh man, I was thoroughly impressed with myself even if I do say so myself!!! The maltose tuile covered the meringue perfectly. The meringue was soft as clouds in your mouth. The lychee ice cream was incredibly smooth, decadent yet light! Watermelon, mint and lime granita give a much needed freshness and tang to the dish, all nicely rounded out by the lychee fool! Success!!!

There was silence at the dinner table as we all dug into the snowegg. I can confidently say, my snowegg will kick Quay's Jackfruit version ANY DAY. Although, I must admit, the Strawberry Guava and Custard apple version will abolish my take in a second!

We demolished the dessert and sat around contently when one of my friend meekly said "ummm....can I have a little more granita?". Too full to move, I told them to help themselves from the freezer. Next thing you know, there were yells of "Bring the ice cream too!", "Oh! Can I have the leftover maltose?!", "Did anyone want the meringue?!". In a whirlwind of flying spoons and containers, everyone had taken the leftovers and assembled themselves another snowegg! hahaha 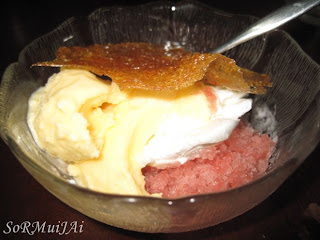 DIY snowegg
If only we weren't so greedy, we would've had room for the 7th Course, strawberries cookies and cream cake I made. But that extra serve of DIY snowegg just pushed us over the edge. 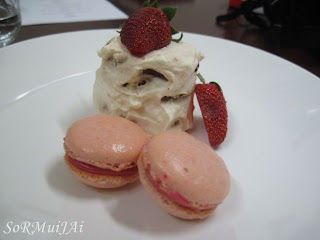 7th Course - Cookies and cream strawberry cake and Raspberry White chocolate macaron petite fours
I packed the cake into little doggybags for everyone before I bought out a container of white chocolate and raspberry macarons. These were meant to be the petite fours, but I packed a few into each doggy bag instead. That is, until one of my friends tried one before moaning out loud. Like a pack of wild animal, my friends grabbed one each, took a bite and then proceeded to grab, snatch, scratch and slap their way to the rest of the macarons! I almost lost a finger trying to salvage a few macarons for myself. Needless to say, they loved the macarons!

After 3 solid days of cooking, the dinner party was an absolute hit! But I think I need a few months off before having another dinner party. I was exhausted! But atleast now I can say I made the snowegg!! Not too bad when you compare them to the Quay ones! 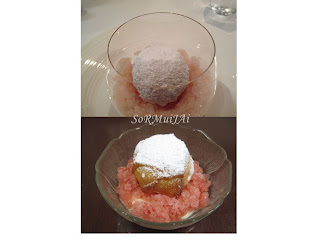 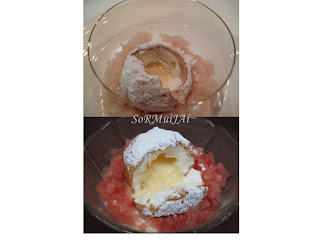 For those of you who want to attempt the recipe, here's a few tips:
Posted by SoRMuiJAi at 5:21 PM

haha I have to agree! I'm glad it was an epic win, rather than an epic fail! Especially after 3 days of cooking!