September is really busy in our family. In September we have Father's day, my Mum's birthday, my Dad's birthday, my little cousin's birthday, and most importantly, My birthday. (We have 3 birthdays in the space of 5 days). And within the next week or so, we'll know if I'll have a little nephew/niece that might have their birthday in September as well! (Quite possibly the same day as me). So to uncomplicate things, we usually celebrate my dad, my little cousin and my birthday all in one go. We were originally going to go Encasa, but with the torrential rain that was pouring down last week, we opted to go to the King Crab House around the corner instead. 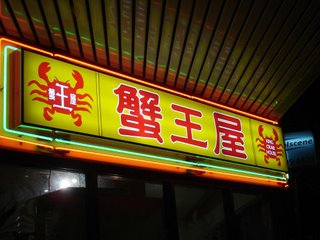 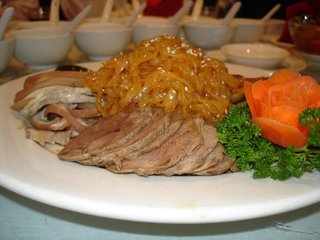 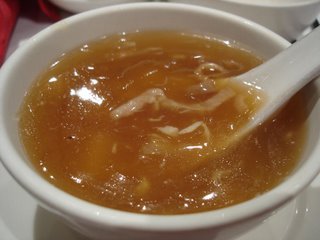 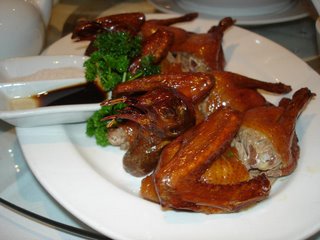 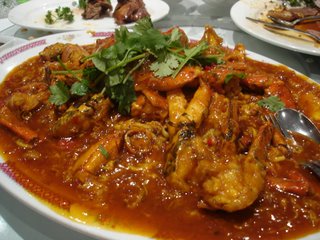 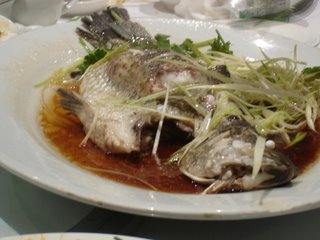 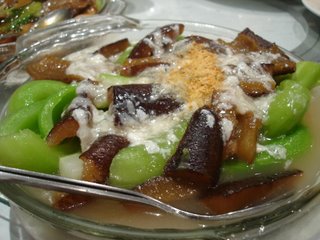 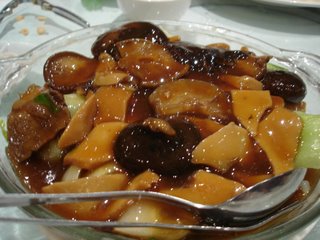 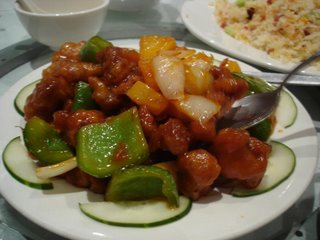 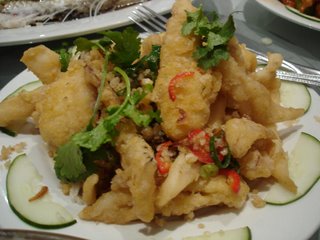 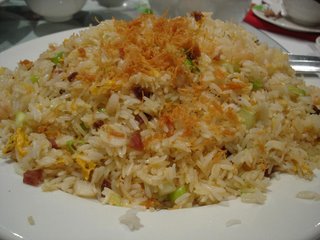 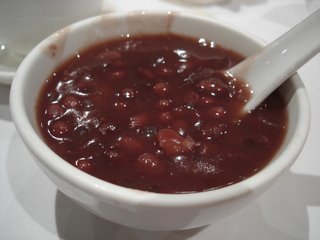 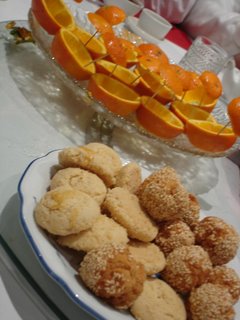 Fruit and biccies (Fruit display was designed by my bored nephews) 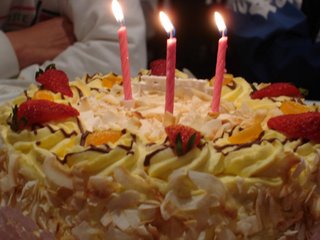 Birthday cake - One candle for each birthday boy/girl
We first dined at this restaurant about 5 years ago. We didn't enjoy the meal and haven't been back since. Recently my sister went as a part of a work function and said it had improved so we decided to give it another chance. Some of the dishes were quite nice. The fried quail was crispy and not too fatty. The meat was a bit tough, but still quite tasty. The sharkfin soup was nice, but it was ashame that they didn't bring out the vinegar until almost everyone had finished their soup. The crab was a bit too sweet, and because they didn't bring out the rice til the very end, there was nothing to mop up the sauce with and nothing to help dilute the sweetness. The one dish which I truely did not like was the sea cucumber with veggies. As you can see in the photo, there was more soup than there was veggies. It was as if they had forgotten to thicken the sauce and just poured a ladel of soup into the dish.

Now that the food part is out of the way, lets talk about the service. Or lack of. The cold platter came out before the soup, which is fine, but they didn't bother giving us any bowls. So we proceeded to grab the soup bowls off the table which means when the soup came out, they would need to lay the bowls out again. The soup bowls were not cleared when we had finished so everyone ended up with 2 bowls and 2 plates since the crab was served next. That I could still put up with. What I couldn't put up with was at the end of the meal, when they had taken all the dishes away, they neglected to collect the dirty bowls. Because we had such a big table, we tried helping by piling all the dirty bowls and plates onto the lazy susan so save them walking circles around us. Not only was there dirty bowls and plates, but also chopsticks, cutlery, cups and even dirty napkins piled onto the table.

They bring out the dessert (and no clean plates) and didn't bother collecting any of the dirty plates. Their red bean soup was actually REALLY sweet so most of us didn't eat it and placed it back on the lazy susan for them to collect. Out they come with the cake. The guy takes one look at the table and said "Oh, let me clean it up a bit first". He uses one hand and shoves all the dirty plates and napkins to one side of the table, plonks the cake down and walks off. No plates, no forks, no knife and a table full of crap. We ended up having to help ourselves to the cutlery etc. And what really really irked me was that the restaurant wasn't busy. When I was working in the restaurant, I used to waitress up to 8 tables, do the take away orders, phone orders AND cook. There was about 6 tables in the whole restaurant, and 4 waiters/waitresses. I would hardly call that run off their feet.

Email ThisBlogThis!Share to TwitterShare to FacebookShare to Pinterest
Labels: Eating out, Family, Food

Hmm, your crispy quail looks more like pidgeon to me :-P