Lets Do Lunch - The Summit

I've been meaning to blog about our "Lets do lunch" thing at the Summit. I'm a bit late, but here it is:

So I met up with Christine on a Friday to do the "Lets do lunch" thing at the Summit. We rocked up really early to try and finish early and head back to work. 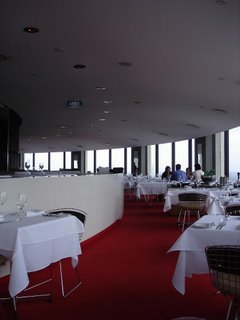 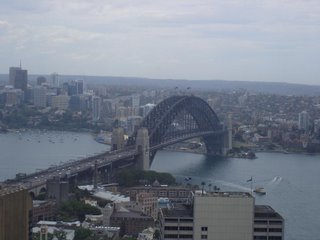 I've been to The Summit many times, but always to Orbit bar for drinks and never for the food. Scouring through the whole "Lets do lunch" menu, The Summit was the most appealing one out of all of them. So when the food came, I was a tad disappointed: 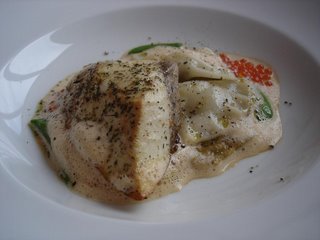 The fish was a tad dry, and the lobster dumplings, well, if I didn't know it was lobster, I would've thought it was a ravioli without any filling. I would've preferred 1 big dumpling where you can taste the filling, as opposed to 2 small dumplings without much taste. The dish was pretty average, except for the puree at the bottom. We still don't know what it was, perhaps artichoke puree? But OMG it was good. If I was home alone, I would've licked the plate clean. I think that alone, made up for the rest of the shortfalls.
After we finished the meal, we were offered tea and coffee, and given complimentry mini friands.... 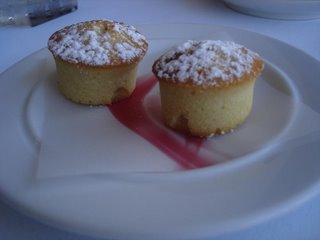 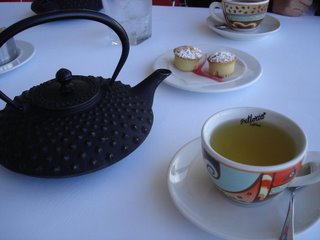 And the sugar! When they first put the sugar down on the table, I thought they were mini caramel/coconut things and wanted to pop them straight into my mouth!! 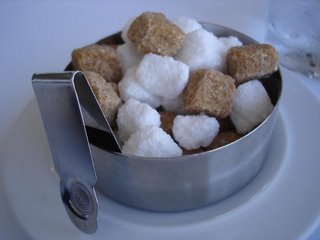 So we sat and chatted, slowly sipping on our tea. Next thing you know, more than 1.5hrs had passed and we had to quickly rush back to work. If only we didn't book the "Lets do lunch" thing at the end of the Good Food month, because I would've liked to have tried a few other places as well. Maybe next year......
Posted by SoRMuiJAi at 10:41 AM