I've been a bit slack with the postings lately. I've taken a whole bunch of photos and just haven't had time to put them onto my computer. So heres a quick peek at what I've been doing. As a part of the little mystery shopping thing we've been doing, one of the nights we decided to grab dinner at Crows Nest before heading off the the unnamed venue. Now I worked at Crows Nest for 3 years, and I practically bought lunch every single day I worked at CN. There was one place I NEVER buy lunch from, and thats New Orleans Cafe. I don't know why. I love the place. They have sensational coffee and really good food, but it was just never a lunch place. However, whenever we do come to Crows Nest at night, it usually involves NOC.

This is when I could go on and on about the history of us and NOC. I could tell you the story where I had too much coffee there late one night with Moishii, and we ended up calling Christine telling her we've been arrested and that we need bail money. Who then ended up calling other people to try and get some bail money together before we called back to say she's just been punked. But lets not bother with that story. Lets focus on the food. We finally brought Christine along so she knew what we were talking about when we're screaming down the phone at her saying we're at NOC having coffee. So we quickly order the food as we want to move on to the next place for the free alcohol: 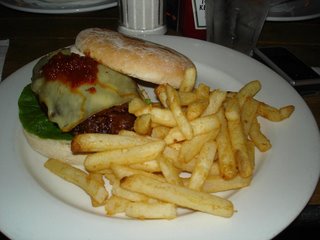 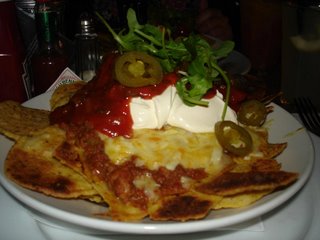 Nachos
The food is always good. Big juicy burgers and the nachos. Good god, thats the SMALL size we ordered. Me and Christine were greedy and were contemplating ordering a large EACH. Luckily we checked with the waiter first, because the large feeds 2-3 people. I couldn't even finish my small serve! And all for $10.90! Too bad we didn't get a chance to have coffee there with Christine. Maybe next time.....
Posted by SoRMuiJAi at 6:51 PM