Wow...has it really been THAT long since I posted? It only seemed like yesterday when I flew to Texas. I guess the time there really screwed with my sense of time hey?
Well, its great to be back in Sydney. It was a lot of hard work, long hours but also great fun. I meet some lovely local, made new friends, ate heaps of new food and definetly got a bit of a culture shock. I mean, I've been to America before, but you don't notice certain things when you're on holidays. Its the day to day things that really amuse me. All the sterotypes you see on TV, its not an exaggeration!

Anyway, let me start with the food first! Since we're in Texas, I thought I'd start with some HUGE food. I mean, everything is bigger in Texas right? Well, this includes the food as well!

The one thing you will NOT find in Sydney, is a Texas baked potato. All these food court places that does baked potatoes, dressed with some butter, cheese, a bit of meat and veggies and maybe a dollop of sour cream. That's not a baked potato. THIS is a damn baked potato! 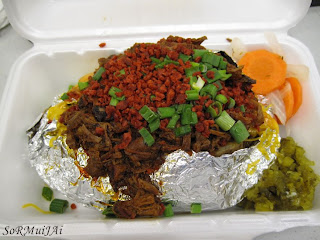 Baked potato with chopped beef brisket
This was ordered from Pappas, one of many BBQ houses in Houston. There's a condiments bar where you help yourself to extra condiments. I opened the box and knew immediately that I'll need something sour to cut through the massive amounts of MEAT on my potato. I helped myself to some sweet relish and pickled carrot salad. Oh, I did chuck some fake bacon and shallots ontop for fun! 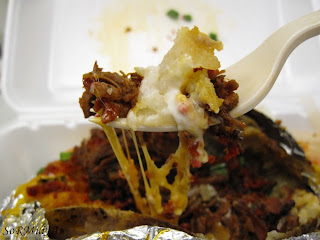 Cheesey...
But wait you say, what's so special about that potato besides the meat? Well....see you can spot what I am talking about.... 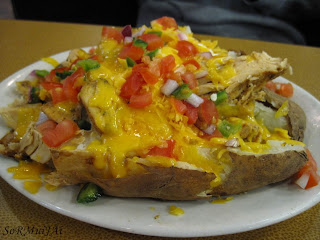 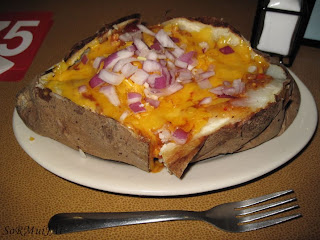 Baked potato with Texas chilli
Still don't see it? Let me give you a better size comparison. 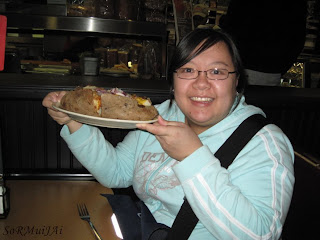 The Texas baked potatoes are about THE SIZE OF MY HEAD. The potato I got from Pappas was so incredibly heavy, I actually had to carry it with both hands as I was either going to drop the box or the box will break under its own weight. I was lucky I was working late that night. It took me a good 4 hours to finish eating... 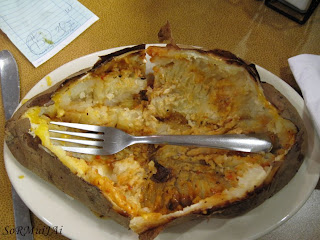 A full size fork can fit entirely into the potato....
The other Texas thing I quickly realised (besides huge potatoes), is that there is meat in EVERYTHING. 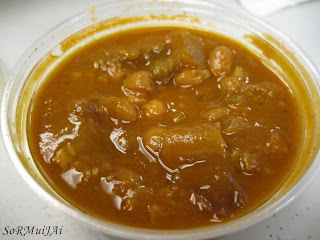 ....where I found chunks of bacon in it!

With all the meat and huge portions, I opted for a healthy dinner where I picked up a salad from Jason's Deli. The order was placed in a brown paper bag, which I did not open until I got back to my desk. Only then did I realise why it was so heavy... 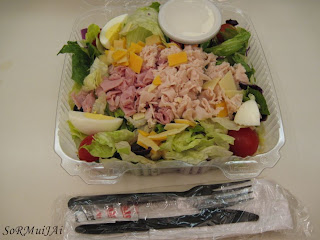 There is enough chopped ham, turkey and cheese in my salad to make 3 sandwiches in sydney. Again, this salad took me 3-4 hours to eat.

Knowing what type of salad was available at Jason's Deli, the next night I decided to go to Pappas and grab a salad there. There was only a side salad or a Chef's salad. I didn't know what the Chef's salad was, but based on the price, it was a main meal salad. Excellent, I shall have that for my healthy dinner! 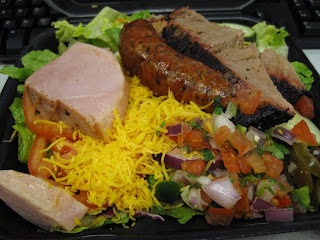 I was......speechless. Why was there a farm sitting on my salad???? 1 whole Chorizo sausage. 2 thick slabs of beef brisket. 2 HUNKS of ham and a FISTFUL of cheese was sitting on my salad. I could make 3 ham and cheese sandwiches with just that! This salad took me alot longer to eat. Probably 5 hours. But that's cos I spent a heap of time picking the cheese out.

Despite knowing the portion sizes at Pappas, a few of us non-Texans decided to go to Pappas for lunch. I was told they do a pretty decent pulled pork sandwich, which was something I just HAD to try! I ordered my pulled pork sandwich which comes with a side of fries. I've also heard great things about chilli cheese fries. So I asked them to change my fries to chilli cheese fries. I knew something was wrong when they took my fries, covered in chilli......over to a pot and then proceeded to LADEL LIQUID YELLOW GOO onto my fries. I assume that's the cheese. And I assume that kilo of fries was my side dish..... 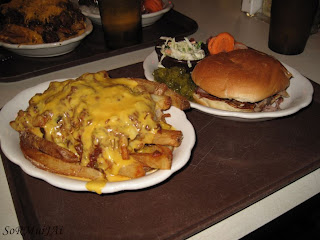 Errrrrr.......I think its chilli cheese fries with a SIDE of pulled pork sandwich.... *cough* 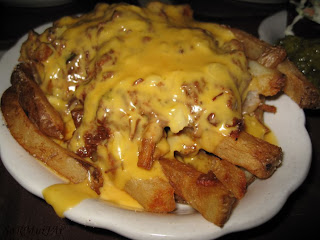 My friend decided to order the BBQ Cheese fries as I had ordered the chilli cheese fries. We thought we can try each other's food. Except what came out practically gave us a heart attack. We assumed BBQ cheese fries meant bbq sauce and cheese on fries. WRONG. Its BBQ MEAT on fries. 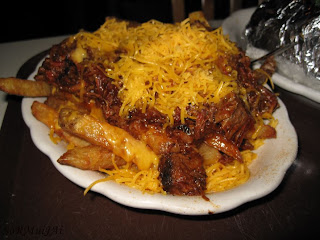 In this case, chopped beef brisket. Which was exactly what she had ordered on her baked potato. The scary thing? There was more beef on the fries then there were on the potato......if that's possible. 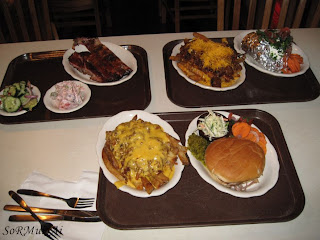 We ended up taking ALL the fries home and proceeded to eat it over the next 3 days. 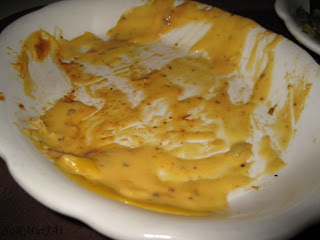 Liquid cheesey goodness...
I had a chat with one of the locals in Houston, and mentioned that I was on a quest to try all the typical American food. Such as Meatloaf, Egg Rolls, soul food etc. I was out wondering one day and found a food court where one of the stalls was selling diner food. I immediately ordered myself a serve of meatloaf. And since I get 2 sides, I picked potato and gravy with Mac and Cheese. I also get to choose a bread roll, so I went for the corn bread. THIS was what I got.... 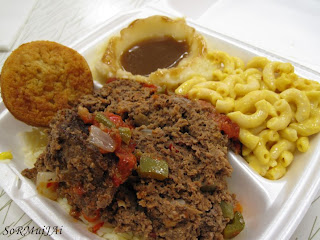 Oh...my...god. The meatloaf, was about as a thick as a book. Plus a chunk had broken off another slab, so they threw that into my container as well. This was all on a bed of rice. That's ALOT of meat.....didn't help I had a whole container of starch! The corn bread was quite nice but very different from what I am used to. This is a much denser and creamier version. I would've liked it a lot more if I didn't have enough food to feed 3 people! I barely got through half of this and chucked the rest in the bin.

Every now and then, when we're working late, they would order food in for us. This time, it was a fusion of chinese and thai. But what really caught my eye was the HUGEEEEEEEE Egg roll! Look at the size of the monster! 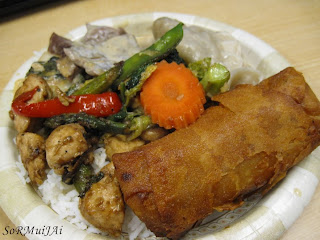 I had an interesting convo with one of the guys over American vs Australian terms. I used to always wonder why people were obsessed over egg rolls when ordering Chinese? And why were they eating it at the beginning of a meal? Cos...egg rolls is a chinese dessert! It usually comes in a tin box and is extremely messy to eat! It was only a few years ago that I realised an Egg Roll was actually our Spring Roll! We were discussing the differences and this is the translation

Anyway, after consuming all the huge portions of meat and cheese, I decided to hit the hotel gym to work some of it off. After the gym, I popped into Jason's Deli to grab a sandwich. Because, you know.....sandwiches are quite healthy. *Cough* 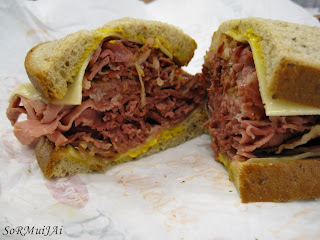 In my haste, I didn't read the sandwich description properly. I assumed it would be a hot pastrami and corned beef SALAD sandwich! Not 1/2 kg of meat! 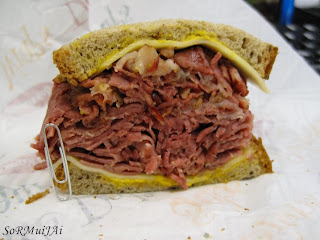 Size comparison
Despite how scary it looks, this sandwich was absolutely DELICIOUS. I've never liked corned beef or pastrami in Australia. And I dislike it even more when you compare the cold, tasteless watery imitation to the luciously moist fresh versions you get in America!