Whilst Gumshara is famous for their Ramen with many people visiting just for a taste, just 2 stalls away sits another less famous Japanese stall called Kimama. Being a hot day, the friend I dragged along just did not want a hot soupy ramen. Instead, he opted to try the Katsudon from Kimama. 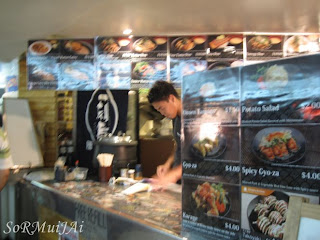 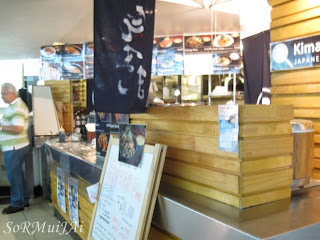 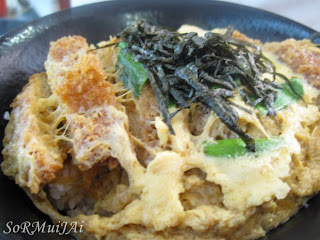 Katsudon
You know you're onto a winner when after the first bite, there's no time to comment on the food as you keep shovelling bite after bite into your mouth. Surprisingly, this little Japanese joint scored a 8 out of 10 from my friend when comparing to his favourite one in Japan. This is a big thing as most Japanese restaurants score a 5 or a 6 when compared to Japan standards.
My friend was so impressed, that we went back a week later so he can get another Katsudon fix whilst I get to try out the rest of the menu. 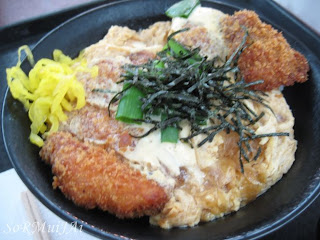 Second visit, just as consistently good!
Being another 30 degree day, I really didn't feel like a heavy or hot meal. I spotted a cold udon dish on the menu and immediately ordered that. 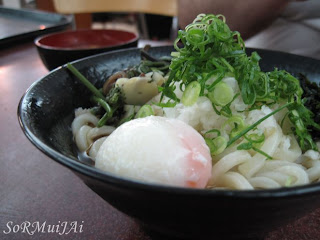 The noodles contain seaweed, some sort of mixed vegetable/bamboo shoot, diced daikon and a perfectly barely cooked egg all swimming in a cold vingeary broth.
Digging into the noodles I hit something hard in the bowl: 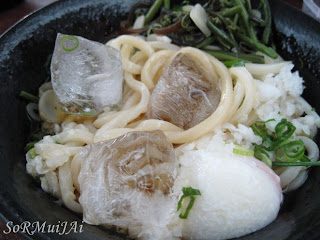 They weren't kidding when they said it was a cold noodle dish! Look at that ice!

Whilst the noodles were incredibly refreshing, I wasn't entirely satisfied after eating it. Mind you, this is not the fault of the dish. Firstly, I personally didn't like the whole bamboo veggie mix as it tasted a bit too much like Gai Larn for me. Gai Larn is probably one of the few Asian veggies that I dislike. Secondly, I was craving something REALLY REALLY vinegary. Whilst the sauce was nice, it didn't hit my craving.
However, with that said, the egg that came with the noodles is one of the best soft boiled/poached eggs I've ever had.It seemed like the egg was very softly boiled to the stage where the whites has just started to firm up before cracking the whole thing into the bowl. I saved the egg til last knowing it was going to be good. And boy was it good! The egg yolk just bursts in the mouth and is incredibly runny and creamy. I would come back just for the egg! Actually, they do sell just the egg.
Since I was ordering something cold, I figured I need something hot to balance the meal out. 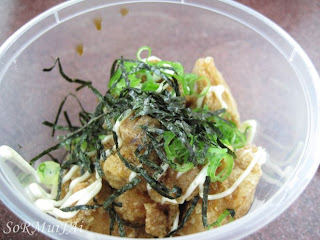 I ordered a side of Karage Chicken with their Teriyaki Mayo. They actually have a few different flavours of Mayo, such as sweet chilli mayo. The chicken was crispy and incredibly juicy and went perfectly with the creamy mayo and a drizzle of teriyaki sauce.
The people in front of me had ordered Takoyaki, which looked absolutely delicious and handmade! (Not deep fried frozen stuff like some other placeS). Next time I'm there, I am definitely ordering the takoyaki. Maybe I should make a meal of takoyaki, karage chicken and eggs? hehe