Ever since Thursday night, I've been craving to make a bento. I know...that's really sad. But I've been spending the last few days trawling through bento websites, and I had so many ideas of what I wanted to make going through my head nonstop! It actually got to the point that I got up at 1am so I could write down some of my ideas. I'm a woman obsessed. Anyway, being a Sunday night, I had a bit more energy to try something more creative with my bento. It'll make Monday so much easier to deal with, although tomorrow won't be so bad because I had to work today. 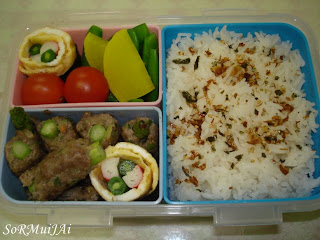 * The crab bean and egg roll was super easy to make. I pan fried a super thin egg omlette using my tamago pan. Cut a defrosted fake crab stick in half and blanched some green beans. I stacked them together, rolled and cut. The egg was a bit too thick so it started to unravel. I used a bit of seaweed to wrap around it to keep it in place.

^ Asparagus beef roll - Too easy. I defrosted the beef rissoles my mum made and wrapped it around a stalk of asparagus. Pan fry until cooked, cool and cut.

I also hit a Japanese grocery store and picked up a heap of new ingredients to play with. Can't wait to eat this tomorrow! Better start planning for what bentos to make tomorrow night! It won't be as elaborate tomorrow night since we're having people over, and I won't have the kitchen to myself :(
Posted by SoRMuiJAi at 7:52 PM

Yummy Lily! Can you make it for my work lunch too? OK thanks! :D

hahaha sure, come pick it up! I won't take any responsibility for severe food poisoning though! lol

I wrote a great big list of ideas too... but I think it's buried under a pile of junk somewhere on my desk at work.

Great idea re: beef and asparagus. Bento does get you thinking about creative things to do with leftovers so you don't end up eating exactly the same food each time. And I think having a blog to take photos is also motivation to present something a little different to your readers. :)
I still haven't tried furikake. Had a look briefly at some in an asian supermarket. Does it add a lot of saltiness to the rice?

There are different types of furikake, some with added salt. One of the packets I got is black seasame and puffy salt. Very simple but tastes really good, you just have to be careful not put too much as it will get too salty.

The other furikake I got is mainly seaweed, seasame, bonito or dried egg. I loaded the rice up with furikake when I got to work, and it wasn't that salty. Mind you, I'm pretty sure its got MSG in it.

I love trying to make the bento look pretty. I find it a challenge to use the same ingredient, but make "different" bentos. Really makes me use up my leftovers in differnet ways.