I had an impromptu dinner party last night to show a few friends how to play mah jong. As I uploaded the photos onto my computer, I realised that:
1. I forgot to take a photo of the main, and
2. I took a photo of the exact same dish earlier
3. That photo was already processed along with a heap of other stuff I've been meaning to blog about 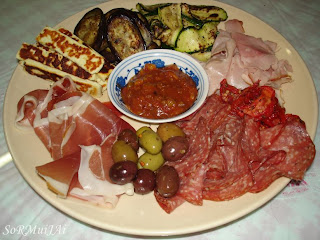 Centre: The wonderful wonderful sweet tomato and pistachio relish I got from Orange

All served with warm crusty bread straight from the oven. 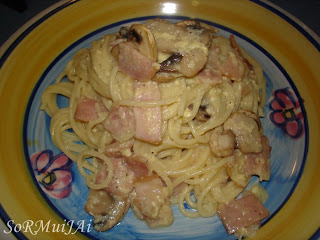 Cabonara/Boscaiola pasta
This is basically what I served. Time was of the essence, less cooking, more mah jong. This was a super simple dish to make. Sautee bacon, mushroom and a touch of garlic. Add pasta, beaten eggs, cream and parmesan cheese. Toss and serve. 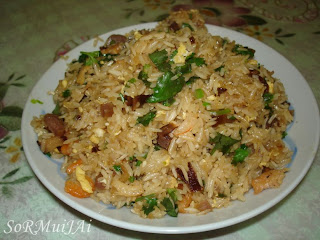 Stir fried glutinous rice
This is something I've always loved getting at yum cha, but they always use so much oil that it makes me feel sick after eating it. The home made version is super quick and super simple. Not much difference between making a fried rice, just a little more prep work. 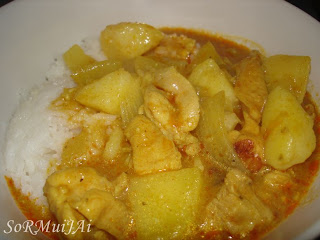 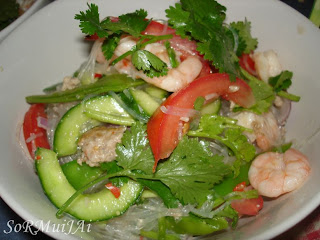 I'm not sure how "Thai" this really is, but it was what I was aiming for. As it's nearing summer, I think I'm going to start making this for my Bentos as well. I soak some glass noodles in hot water, then rinsed with cold water and drained. I then browned some mince and prawns before letting them cool. In the meantime, chop up some tomatoes, cucumber, coriander, onions, chilli. The sauce was made simply from fish sauce, chilli, garlic, lemon juice and sugar. Toss it all together and leave it for a few minutes before eating. 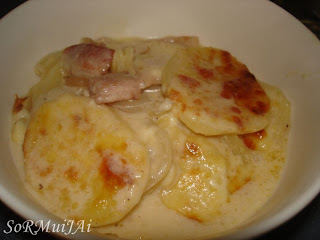 Potato and bacon bake
Wayyy too simple to make. I like to sautee my bacon first whilst I slice some potatoes and onions thinly. Layer potatoes, bacon, onion and a sprinkle of cheese. Finish with a layer of cheese ontop. Pour in a mixture of cream, pepper and a little broth (I like to add chicken broth so its not so rich). Bake until potatoes are tender and you have a lovely golden crust on the top. 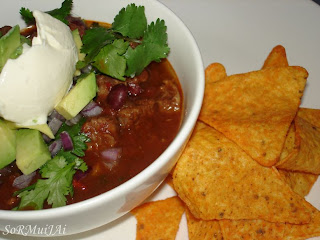 Not much I can say about this, except that I used this recipe. This was my first time making a chilli, and it turned out really really well. The addition of chocolate gives this dish a deep complex flavour. I probably ruined it by eating it with supreme cheese doritos! lol 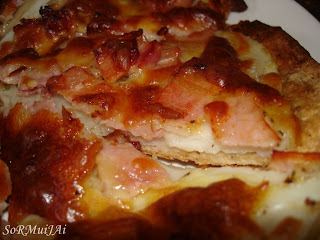 Potato and bacon pizza
I made this pizza as a part of a onling cooking comp. I didn't win, but did end up near the top end of the scale! This was basically a twist on a traditional Italian potato pizza, with the addition of bacon. You can't go wrong with adding bacon to things can you? 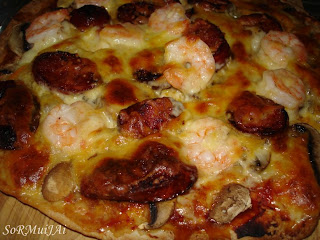 The competition only allowed one entry. But I couldn't decide what to enter so I made this pizza as well, but in the end I submitted the potato and bacon one. Basically just mushrooms, prawns and pan fried slices of chorizo topped with cheese. 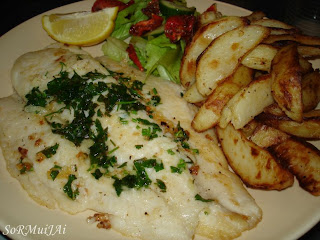 Pan fried fish with home made wedges and salad
I was running late one day and the local fish monger closed, but I had a real hankering for fish. I ended up grabbing a few basa fillets from Woolies, even though they were frozen, they still tasted really nice. The fish was panfried with salt and pepper, and when the fish was almost cooked, I threw in some butter, garlic and parsley before deglazing the pan with lemon. Wedges were tossed with garlic powder, paprika, salt and pepper. 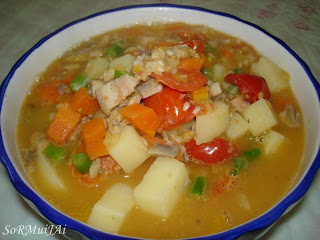 Fridge soup
I don't really know what to call this, but it was basically whatever I could find from the fridge thrown together. I chopped up some bacon (yes, I've been using ALOT of bacon) and sauteed them in a pan with garlic, carrots and potatoes. Add water, chopped tomato, asparagus, beans and mushrooms. I also added some red lentils to thicken the soup up. I seasoned the soup with salt, pepper and a dash of paprika. I could not believe how flavoursome this soup was. It was as if I had made it a whole leg of ham! It was brilliant!
Posted by SoRMuiJAi at 4:36 PM