I've been super lazy for the past few months. I just realised that I have quite alot of photos I've taken and intended to post....but never got around to it. I blame the fact that I lost my bluetooth USB pen, and the other one I've got doesn't work. But with my new baby laptop that has built in bluetooth, I have no excuse now! Instead of doing multiple little posts, I'll do one mega large one. Some of them may be a bit vague since I took some of the photos ages ago, or I only know the chinese name of the restaurant! Oh.....and crappy photo quality since its all taken with my mobile! hehehe

Top Choice BBQ Restaurant
(I think...its the one directly opposite CBA and not the one next to the station) 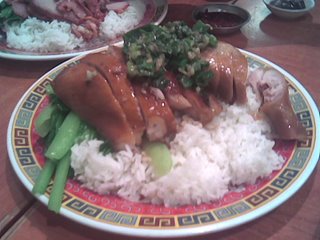 This is a must have every time we come. Mainly because the servings are ridiculously big and we always have something to take home, and since its the easiest type of roast for my grandma to eat, its a dish we always order. The shop is quite smart in that they make large quantities of Soya chicken maryland, meaning every order is a guaranteed juicy moist thigh and drumstick. Good for asians, maybe not so good for caucasians who enjoy the breast more. The only to be careful is sometimes its not fully cooked in the bone as they try to keep it moist. Never stops me from devouring everything though..... 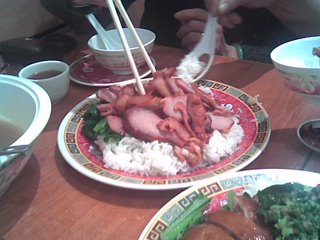 BBQ Pork Rice
This is one of the rare occassions where we actually order BBQ Pork. Mainly because my mum makes the best BBQ Pork in the whole of Sydney, and I have yet to find a restaurant that serves anything that rivals my mum's BBQ Pork. But then my mum also makes one of the most awesome Soya chickens and we still order it every time.....The BBQ Pork was nice, but it was missing that juicy sticky outer coating with little burnt corners that makes my mum's BBQ Pork truely superb. I guess we order it simply cos of the value. Oh, and if you come, be prepared to either you eat until you explode, or take away multiple containers! 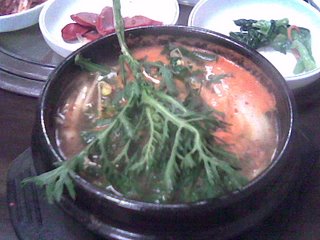 Spicy Fish Egg Stew
It may not look like much, and to some, it definately won't sound appealing. But oh my frickin god this is the best soup ever! (Ok...maybe not EVER when compared with Don Don's Udon...) This little pot of orgasm contains tofu, sliced zucchini/cucumber, bean sprouts, chilli, seafood broth and the most important ingredient....fish eggs. Yes real fish eggs like the one my mum used to pan fry with chilli and soya sauce. I love biting into a piece of fish egg and have the delicious seafood broth fill my mouth. That combined with the popping of each little micro fish egg makes it one of the most amazing experiences ever! Ontop of this orgasm inducing soup, BBQ City also has the best damn side dishes you will ever taste......and its all unlimited!! MAUAhaAUah 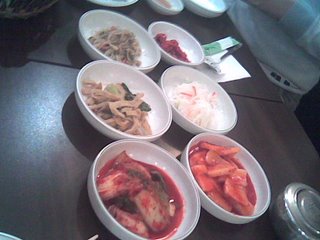 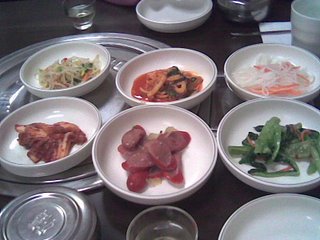 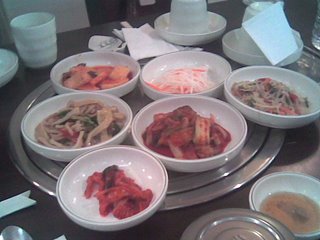 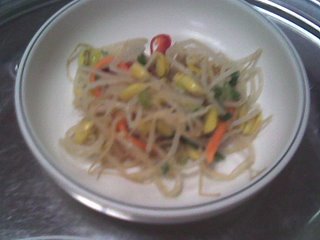 Marinated bean sprouts (I love this one!) 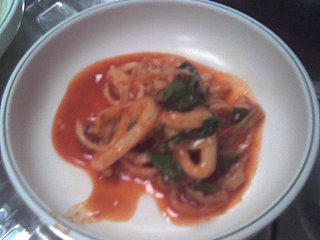 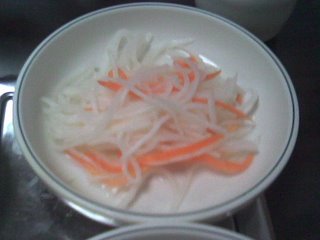 Pickled radish and carrorts (And I love this one too!) 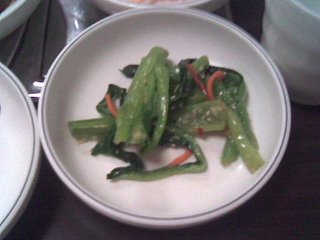 Green Vegies marinated in Seasame Oil (OoOo I DEFINATELY LOVE this one!) 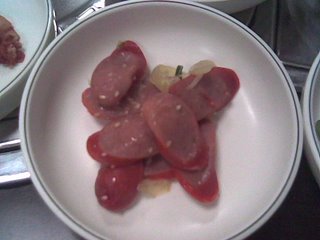 Marinated cabanossi (Is this even korean?) 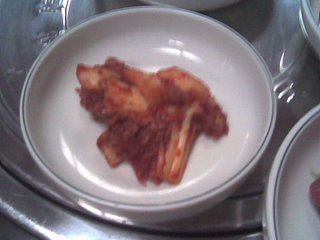 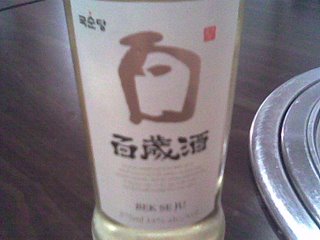 I absolutely LOVE the side dishes, especially any of their seasame marinated veggies. Keep an eye out for this potatoe cubey thing that is covered in chilli oil. Its not that hot, but oh my god its good! It is oh so good!!!!! Usually I would order my little pot of fish egg stew, and then consume atleast 3 rounds of side dishes, each round with a minimum of 5 dishes. Yes, I'm a pig ok? But consider the stew is mainly all liquid...its ok....right?

Other great dishes that BBQ City has is definately their Kim Chi pancake, Spicy cold noodles, sweet and sour chilli tempura prawns and of course, their marinated BBQ meat. MmmMm Its a cold night and I really really feel like some korean right now!

I first visited this place with my Italian teacher after the end of our beginners course as a celebration dinner with the other classmates. The place is run by Italians, and visited by Italians, and it was the perfect place for us to practice our Italian. The place can be absolutely packed and chaotic most nights. We went on a Wednesday night at 7:30-8pm and the place was chockablock full with people spilling out onto the footpath. Luckily, my teacher being an authentic italian, barged into the restaurant and started screaming at people in italian. They in turn, screamed at her in Italian. Or maybe they were just having a normal conversation.....you never know with Italians, they always seem to be arguing!!

20mins later, we are shown to our table after my teacher befriended the owners and got some free snacks from them. The easiest way was to order a few pizzas to share. We had stopped by Lord Roberts before hand and picked up a bottle of red for dinner. We were starving, and when the food came out, we had to give the table a quick wipe from our drool: 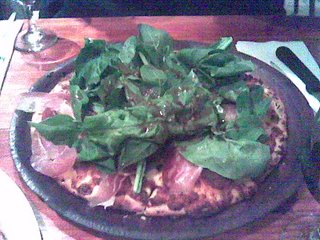 "White pizza"?
I've heard of people referring this as the white pizza before (since I can't remember the name). Instead of the usual tomato base, it had a garlicky base from memory, and the pizza was draped with smokey, salty and slightly oily slice of procuitto served with rocket drizzled with Balsamic Vinegar. MmmMMmm Its not a "pizza", but its definately good!! The procuitto contrasted with the peppery fresh rocket really nicely, and the balsamic vinegar seemed to cut through the grease nicely. Definately one of my favs! 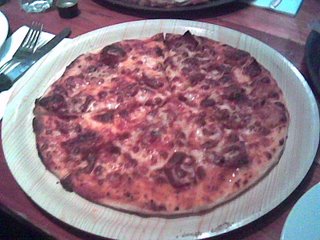 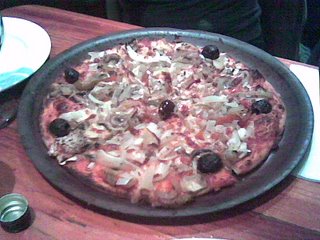 Vegetarian Pizza.
The Pepperoni pizza was nice and spicy, but a bit too oily for my liking, but then thats probably why I rarely order a fully meat pizza. The vegetarian pizza was quite nice, but it was a shame they had skinned and sliced the eggplant so thin, I didn't even know they were on the pizza if I didn't read the menu. I like my eggplants in big thick meaty grilled pieces. I like to SEE my eggplants. But It was still delicious considering I'm not a fan of vegetarian pizzas. "What the fark? You don't like meat pizzas and don't like vegetarian pizza??". Yeh so sue me. I like my pizzas with a nice balance of meat and veggies, preferrably 1/2 kilo of mushrooms. The only time I really order a vegetarian is because I am under the illusion that it is healthier for me....even though it has about 3kg of cheese ontop....

This is my local coffee joint. You will most probably find me lining up for my coffee at 9am and 3pm daily. (Even though I'm trying to ween myself off the 3pm coffee). The owner Bill, has the most amazing memory ever. Even if you're not a big coffee drinker, you should still try and visit every day for a week and observe their production line. They have one guy on coffee, one guy doing the milk, and Bill. Bill will take one look at you, and know exactly what coffee you want with how many sugars. On average there are 20 orders waiting to be filled at any one time, and Bill can remember exactly who ordered what and in what order. There could be 10 lattes, and he will remember who came first and serve in that order. They make a kick ass coffee and the most gorgeous coconut macaroons (They're my inspiration when it comes to macaroons). I ordered their Cannoli Zucherati with a vanilla cream filling. 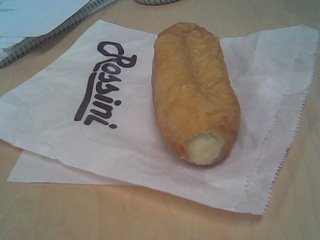 It looks like one big fried oily donut, surprisingly, it wasn't very oily. And the texture was far from a donut, it is closer to one of those sweet bun/bread things. Probably not something I will get again simply because I'm not a huge fan of sweets, but those who like their desserts will enjoy this.

Alcohol kills brain cells......I visited this place a few weeks ago and already the name has escaped my head like a deranged lunatic running from prison. All I know is this restaurant is on Great North Road near Kings Road. The restaurant has a pastry case on the left hand side. 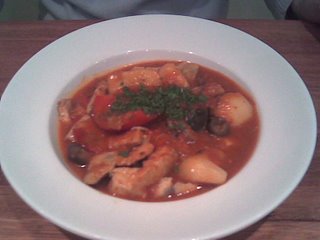 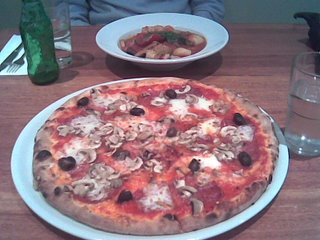 Salami pizza with extra mushrooms
This is shocking.....I can't even remember what we ordered without looking at the photos!! I didn't get to try the chicken, but it definately looked appetizing. The pizza I ordered was HUGE. It was GIGANTIC! HUMMONGUS! It was the size of Anna Nicole Smiths boobies put together!! Look at the size of my pizza in comparison to the Chicken! I betcha someone felt ripped off! MauahaHA

Despite the pizza looking big enough to feed 5 families, it was actually really really thin. The chef had stretched the pizza out making it extra thin to fit that particular plate. Despite the pizza being paper thin, I still struggled to cut through the dough with my knife. I hear "Eating pizza with a knife! The sin!"....well unfortunately, I can't bite. And I mean I can't bite! Anything thinner than a buger patty I cannot bite through....so let me be! The toppings were delicious, but because I had asked them to add extra mushrooms and they had made the base extra thin, the centre got quite soggy. I'm hoping it'll be better the next time round. 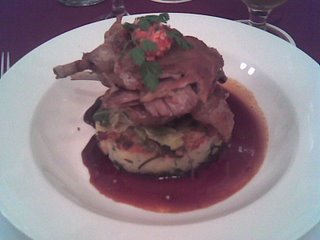 Confit of Duck Maryland with a Herb Rosti
I've been to Red Oak previously for a friend birthday, only I don't remember a thing I ate. This time round, we visited as a end of project lunch and I had to order the duck after missing out last time. The Duck as beautiful and melts nicely in the mouth. The Herb Rosti seemed more like a high class bubble and squeek more than a Rosti, but still good since I love potatoe anything. Not being a beer drinker, I still enjoyed all the beers I tried that day. I started off with the Honey Ale, which was still a bit too beer tasting for my liking. I then moved on to their Raspberry beer which tasted more like champagne than anything and finished off with their chocolate beer. OooOoo the chocolate beer was nice! It tasted like liquid dark chocolate, only without the sweetness. Perfect for me! It actually felt like I had just finished a piece of chocolate. I'm definately going to be back for their chocolate beer. Oh, and they also have some of the best hand cut chips around!!

Ok I know I'm late......I know the wedding was a good 2 months ago....but my bluetooth was broke ok?? The reception started with canapes and drinks in the foyer. We were finally led into their dining room and got seated. With a bit of a mix up, 4 people in a row ended up with the same entree of fish (Usually they alternate the dishes). We had originally came up with this grand plan that I get the chicken for entree and the fish for the main, but I ended up with 2 dishes of fish, not that I complained. The main fish was gorgeous. The Fish was flakey and moist (Very rare for large catering events) and the vegetables were tender. This is the first time I've had brocolini, and I definately going to start cooking with them. The other dish was a tender steak served with a Rosemary Jus. The Steak looked nice and tender and the sauce was actually really nice. 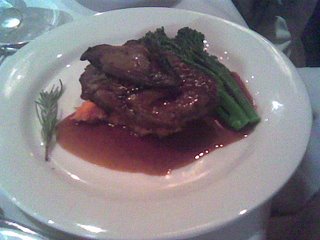 Fillet Steak with a Rosemary Jus and mash 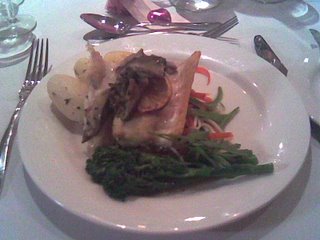 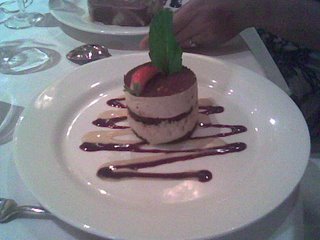 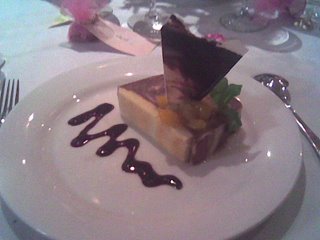