This place used to be our old watering hole on a Friday night simply because of the free alcohol. Who could pass up $2.50 beer, wine and spirits and $5 cocktails from 5pm - 5am? Then they got rid of their happy hour. The place went from being packed until it bursting at the seams, to a ghost town. We went there once or twice after that......but with the lack of cheap drinks and seating, we gave up and moved on elsewhere.

Awhile back, we were meeting a few friends and decided to give the Pavillion another go. To my surprise, they had opened a Newtown Thai III in there. When I was working at Sydney Uni for a work project, me and a few other workmates will trudge up City Road until we got to Newtown Thai II for their cheap $5.50 lunch specials. (I highly highly recommend their crispy fried chicken with sweet chilli sauce and rice)

Ever since I moved on to another project, and now, on to another company, I don't get to go to Newtown for their cheap lunch specials anymore. And I really missed Newtown Thai II. Since our new discovery of Newtown Thai III in the city, we decided to head on over there for dinner one Friday night and was more than pleasantly surprised. What delighted us more, was that ontop of good value top nosh, the Pavillion still had their happy hour......just later! So last night, we decided to make a night of it.

Dragging (I don't think she was THAT unwilling hehe) Cookiez along with me, we headed up to Pavillion and out of the cold. We were quite early and got ourselves a nice couchy seat by the side in the dark. We barely had to scan the menu and knew exactly what we wanted. 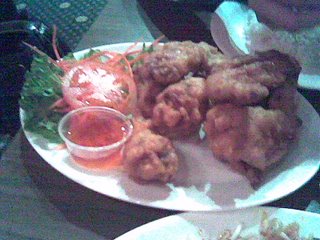 Peek Gai Tod $6
For Entree, we decided on their Peek Gai Tod, which is marinated Chicken Wings deep fried and served with a sweet chilli sauce. I was expecting little puny wings that had been deep fried without any batter. The look on our face was priceless when the waitree placed the wings down....The wings were HUGE! I think we both went all bug-eyed. The batter was surprisingly light and cripsy, but it soon got too oily after the first wing. We ended up taking all the batter off the wings before eating them. The chicken itself was gorgeously tender and moist! I only wish that they had cooked it without the batter or drained it better so I could enjoy it more. Maybe when I'm on more of a junk food mood would I devour the wings with batter and all. 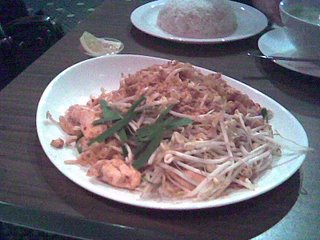 Chicken Pad Thai $8.90
Ok....this was HUGE. And I mean HUGE! But then it could do with the fact that they loaded the dish up with heaps of bean sprouts boosting the size of the dish. The Pad Thai was really good and definately good value, although personally, I like my bean sprouts slightly cooked. Next time I order this, I'll ask them to semi cook the bean sprouts for me. 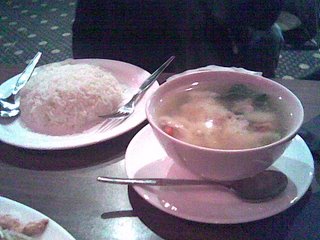 Po Tak $7.50, Small boiled rice $1.30
I love Po Tak more than Tom Yum Goong. I first tried this soup last year when I was having problems with my jaw and I couldn't actually open my mouth (A blessing for alot of people) and ended up ordering Po Tak mixed with boiled rice for lunch every day. The soup is light and tangy with a hint of chilli. The soup is alot sweeter than a Tom Yum Goong simply because there is so much more seafood in it. I find it less rich and salty than a TYG which can sometimes be too oily as well. Its good as an entree, or a main if you eat it with rice.

After completely pigging out and fully greased up from the wings, we thought we should order something to aid our digestion. 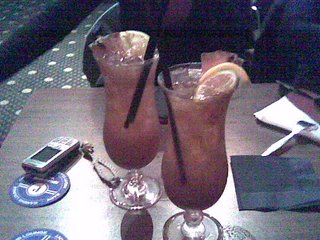 Long Island Iced Teas $15@
Hey! It does help with your digestion! A good long island tea should not taste of alcohol....it should taste like a tangy iced tea. And this bar tender got pretty close! The LIT was really nice and tangy thanks to all the lemon juice they put in. The coke added a little sweetness taking away the harshness of fresh lemon juice and helped mask the strong alcoholic taste. We're definately getting this again next time!!

If you want to have a nice meal out, I'd recommened rocking up early. They tend to dim the lights and pump up the music around 9pm forcing you to scream across the table just to have a decent conversation. Its a shame really, more of our friends joined us afterwards and we would've ordered alot more drinks if they didn't have their bloody strobe lights giving everyone headaches.