Happy year of the Tiger!

Finally Chinese New Year falls on a weekend this year! This means I'll be home for both CNY eve and CNY day! Usually my mum slaves for 2-3 days just to cook up a CNY meal, this time I'll be home to help! 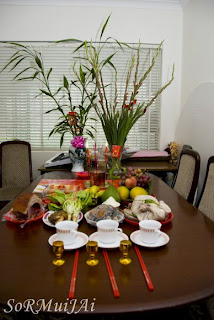 CNY setup
The men of the family decided to contribute by going to the Fish Markets to pick up a lobster. They also grabbed 2 dozen oysters, sashimi and sea urchin (uni) to bring back as a snack. I guess they were feeling guilty because they went and bought a mixed seafood platter and pigged out on it before coming home!! Like what the!? I mean, we're only having a 13 course feast in 3 hours time! 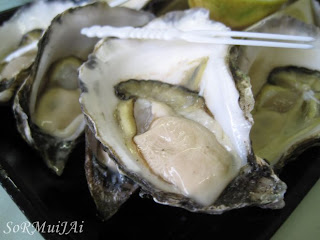 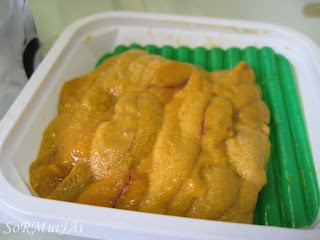 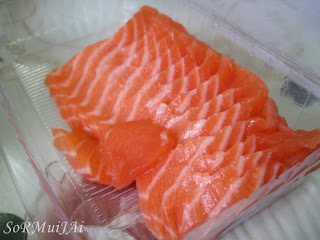 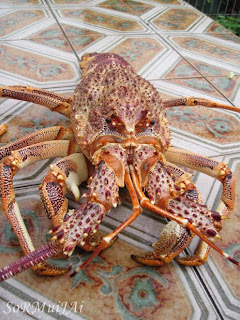 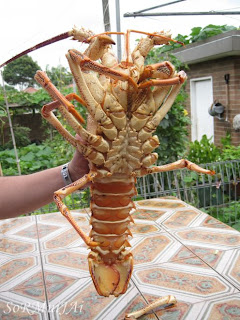 This somehow reminds me of a scene in Aliens 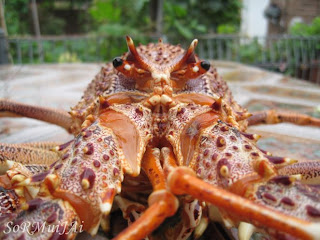 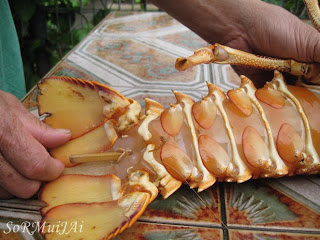 Cleaning the lobster
Luckily our family have all worked in a restaurant and was more then adequate in preparing the lobster. Firstly, you need to get the lobster to pee everything out. And the best way is to shove a chopstick up its hole. Doesn't look pleasant, but it happens every time you order lobster at a restaurant. 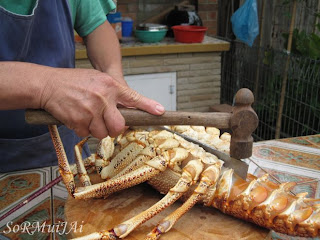 This baby was so huge our giant cleaver wasn't strong enough for it. So dad grabbed a hammer to help with the chopping. 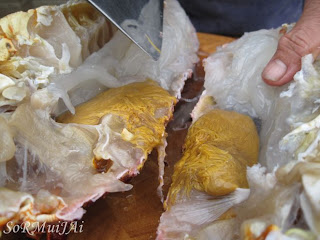 Mystery stuff
We've only been chopping up lobsters for the last 15-20 years, but we've never seen so much yellow stuff in it. We were arguing what the hell it is. I'm saying its roe. Sister claims in brains. Cousin reckons its poo. Someone was saying hair. I've just never seen so much inside a lobster before! Anyone know what it is?

Dad basically scoped it up and put it aside. If its roe, we might steam it with some eggs tomorrow night. As dad was chopping up the lobster, it decided to fight back. The muscle reflex caused the leg to bend, which then caused one of the giant spikes to embed itself into my dad's finger. Blood comes gushing out when he pulls the spike out and my sister takes over whilst I clean him up. 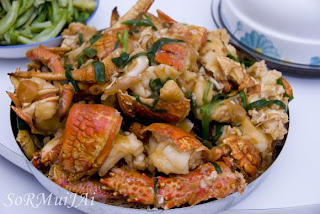 Dad got revenge by cooking up the lobster in heaps of ginger and shallot sauce, which was then put on top of a bed of pan fried crispy vermicelli! No rice needed tonight since everyone was eating the lobster sauce soaked noodles on the bottom! YUMMM!!! Usually we get e-fu noodles, but every single grocery store around us was completely sold out! All 6 of them!

I decided to contribute by making gyoza / potstickers / dumplings for something different this year. 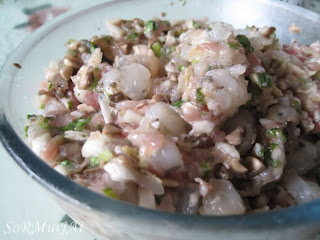 Pork, prawn and mushroom filling
Since you must have prawns during CNY, I half bashed, half chopped up a heap of king prawns. Then I added a little pork mince to help it bind, some chopped button mushrooms, wongabok and coriander. This was seasoned with fish sauce, sugar, pepper and sesame oil. 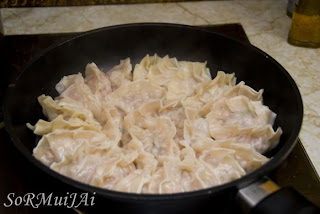 My babies cooking on the stove 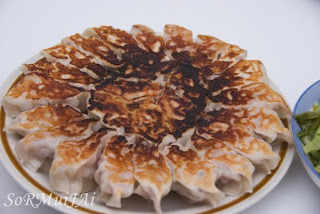 Upskirt!
The Gyozas look a little burnt, but it was actually the starch water going brown rather than the actual wrapper. Luckily it looks a bit burnt, but didn't taste it! In fact, the gyozas had a lovely sweet juice from the prawns, mushrooms and wongabok. This was the only dish that was gobbled up! But then we had so much food! 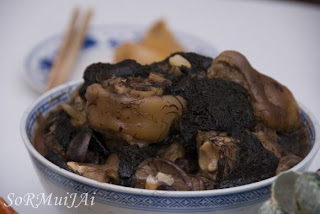 Pigs trotter, mushrooms and black hair moss
Must have dish during CNY. We usually take the leftovers and add it to a congee or soup. 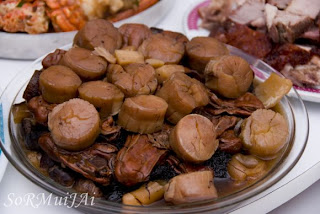 This dish has fish maw, mushrooms, dried oysters and dried scallops. Again, another must have. We usually freeze this dish and use it in stir fries, soups and other stuff for the next month or two. 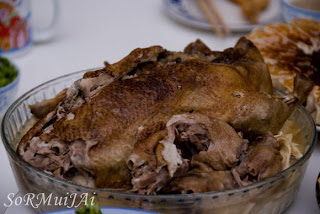 8 treasure duck
Mum decided to try a different duck this year. The 8 treasure duck is stuffed with glutinous rice, dried shrimp, dried scallops, preserved meat, peanuts and a heap of other chinese herbs. This is then slowly steamed for 2 hours until the rice absorbs all the ducky goodness and falls apart when prodded with a spoon. 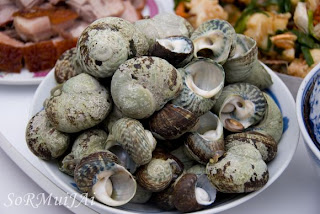 Sea Snail / Conch of some sort
For some reason my cousin was obsessed with these when he saw them at the fishmarkets. No idea why as our family never eats this. I tried 2, but my cousin ended up eating 90% of this dish! The kids refused to touch it! hehe 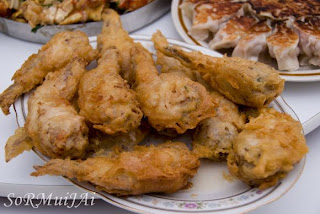 Hong Kong chicken wings
Its been a few years since we made this. Usually we would make it for the Moon Festival, but for various reasons, we haven't made it for awhile. Basically you take a aw chicken wing, carefully pull out the bones. Then you stuff it with a mixture of pork mince, prawns, mushrooms, water chestnuts and a heap of other stuff. You then steam them until its mostly cooked. Then you batter and deep fry these babies! Dad's contribution! 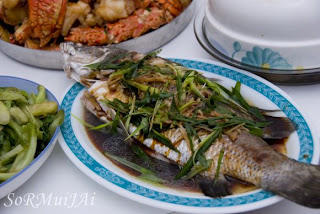 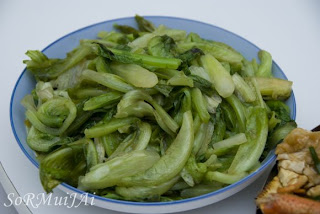 Fish and lettuce is a must have for CNY. We kept it simple since there were so many other rich and complicated dishes already. 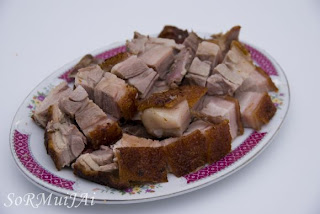 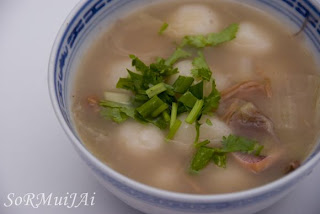 Tong Yuen
This is a MUST MUST have for CNY. The glutinous rice balls signify the togetherness of a family. I know a lot of families make a sweet version. But where my parents came from, we've always had a savoury version. The broth is made of chicken stock, heaps of dried shrimps, dried scallops, daikon, dried squid, wongabok and other goodies. 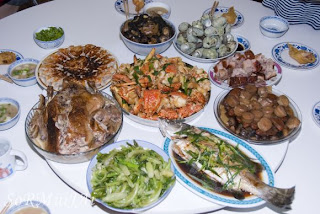 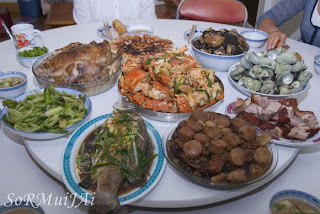 Posted by SoRMuiJAi at 9:51 PM

Lorraine @ Not Quite Nigella said...

What a magnificent spread! Happy Chinese New Year. I've never cooked a live lobster before so this was a real eye opener! :D

Happy Chinese New Year to you too!! Cooking a live lobster isn't too hard. The main issue most people have is more to do with equipment rather than skill.

We're quite lucky because we've installed a restaurant like stove at home with the giant wok burner. You're standard stoves just don't generate enough heat meaning you'll need to cook in very tiny batches, or there's not enough heat causing the meat to go soft. I would probably say its too much effort for a standard family kitchen. (probably explains why all our family friends like to come over for dinner! haha)

Lucky lucky family! What a marvellous feast! Love the HK chicken wings but not the scary-looking lobster from Aliens .... :-)

You probably won't need to eat for another year after all that food!

Happy Year of the Tiger!

Thanks Joey! Happy CNY to you too! My mum was quite smart and gave most of the food away!! Otherwise we'll be eating leftovers for the next 3 months!

Today is meant to be a vegetarian day by tradition, I guess to make up for all the feasting yesterday. Only I'm going to a BBQ to help a friend eat a meat tray! haha kinda defeats the purpose ;)

Kung Hei Fat Choy! That's one very impressive huge lobster and very interesting to read how you're supposed to clean it — I never knew about that. 3.7 kg. that must have cost a pretty penny! :-) i just had lobster today at Golden Century.

We've actually been cooking lobster for quite a few years without realising that you're supposed to drain the wee! It was only a few years ago that we were taught that trick! Always handy to know! hehe

Thanks Betty! Congee sounds fantastic after all the eating I've been doing! We actually end up eating Tong Yuen, the glutinous rice ball soup things for a few days after to semi detox. Except I cheat and throw leftovers into it! hehe ;)

WOW! I love the CNY feast! Should have invited me over! :P
My mouth is watering just by looking at the pictures!
One more thing...how BIG was that LOBSTER!!!!!

Cherryblush: Thanks! The lobster was huge!!! We actually couldn't finish the lobster and had to have it for leftovers. But mind you, we did have 13 dishes!