We organised a catch up with some friends. Usually we would've pick Korean as it seems to be the group favourite. However, on this occasion, one of my friends was a vegetarian for the day. I had a quick look online and chose Mother Chu's Vegetarian restaurant. Its one of the few truly vegetarian places in the city, and its been a restaurant I've always wanted to try. Its hard to convince carnivores to go to an all vegetarian restaurant just for the sake of it. But in this case, we had an excuse! woohoo! 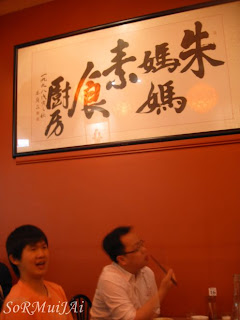 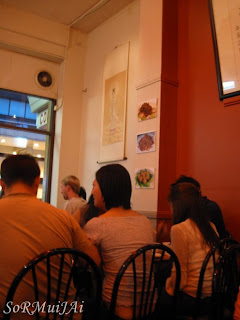 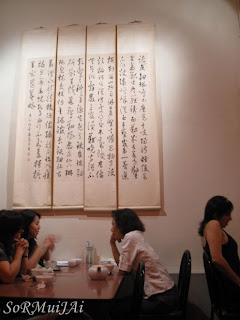 Since most of us haven't been to a vegetarian restaurant before, we really had no idea what to order. Luckily they had some photos in the menu and on the wall, so it was a matter of pointing to a few random things and hope for the best. 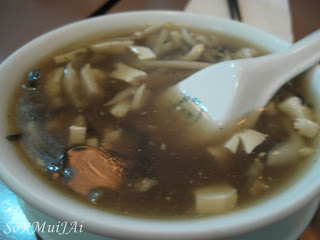 Hot and sour soup
First up, hot and sour soup. Me and my friend both LOVE hot and sour soup. And neither of us could believe this was 100% vegetarian! NO WAY! It taste so much better then any other meat version we've had before! The soup had a perfect balance of hot, sour and salty. Most of the time its either not spicy enough or not sour enough, forcing me to douse the soup with heaps of pepper, chilli and vinegar. This however, was PERFECT. Cubes of soft silky tofu, crunchy black fungus and bamboo shoots and a few slices of fresh celery. We're definitely coming back just for the soup! 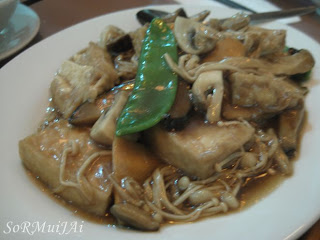 Tofu with fresh mushrooms
This is very similar to what you find at a normal Chinese restaurant. Lightly fried tofu topped with stir fried button, shitake and enoki mushrooms, all on a bed of veggies. 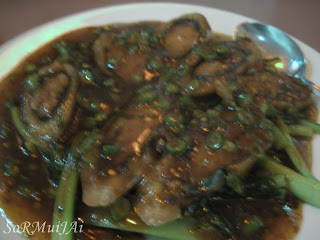 Sweet and sour cripsy gluten rolls on veggies
The crispy gluten roll was unbelievable. Layers of gluten and seaweed were rolled and deep fried til crispy. This was put onto a bed of stir fried veggies all topped with a sweet and sour sauce. I loved the gluten roll, but wasn't too keen on the veggies + sweet and sour sauce combo. The combo just doesn't work for my taste buds, which was great for my friends who lapped up everything else! 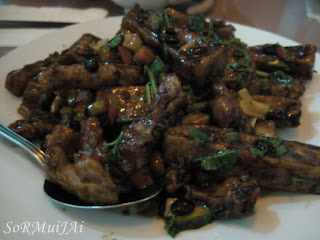 Fried gluten and eggplant in black bean sauce
We didn't even know what we had ordered when we ordered this. We saw a photo, it looked good, we pointed to it. Thank goodness we did, because after the soup, this was my second favourite dish! The batons of eggplant was fried until crispy on the outside, but the inside was soft, silky and creamy. The gluten was battered and then deep fried til crispy. I broke one of them up and I swear it looked like chicken! It even had some of the fibre looking texture! Definitely a must order!

Most of the vegetarian food I've had is the fake chicken, fake duck, which is made of layers and layers of bean curd skin, compressed, deep fried then stewed. The problem with those fake meat is that, whilst its delicious, its EXTREMELY oily. To the stage you feel slightly ill after consuming all that oil. My friends were a bit worried the vegetarian food would be like that, but we were all pleasantly surprised at how delicious everything was. And there was no meat in it! I think the saying of the night was "I can't believe its not meat!" hehe We've already trying to organise another outing to have the soup again!


View Larger Map
Posted by SoRMuiJAi at 11:37 AM

Email ThisBlogThis!Share to TwitterShare to FacebookShare to Pinterest
Labels: Eating out, Food, Vegetarian

I have been visiting your recipe blog regularly. The way of recipe tips looks to be easy for all readers. I would personally recommend our blog visitors to subscribe to obtain useful posts like this periodically. Particularly post on "Mother Chu's Vegetarian Restaurant" is awesome. Get in touch with us via our websites savories restaurant | bengali sweets